Arise Ye Wretched of the Earth

Arise Ye Wretched of the Earth

After completing the Bokkenrijder project that had been several years in the waiting, I was very excited to put on a game. The scenario is set in the mid to late 1600s in the United Provinces along the coast by the North Sea. The Dutch players have been given a local force of civilians and militia and have been told that fires have been seen to the east of their town. They are permitted to place the units anywhere on the table with up to two in hidden positions. The Bokkenrijders have set a trap for the townsfolk with a small force of 1 to 2 units attacking a town to the east; these units will appear on the table’s east side on turn 2. The Bokkenrijder’s primary forces will arrive on top of the “dike” at the north edge of the table. The ultimate goal of the ghostly raiders is to get to the local graveyard and have their drummers beat out sounds to raise the spirit of a denizen of the deep, in this case, the female mounted character. Any other mayhem caused is up to the imagination of the players. The Dutch do not know the goals of the goat riders and win if they prevent them from summoning the demon. The “Donnybrook” rules were used with some minor modifications (that the author’s encourage!) for the peasants and ghostly forces. Fast playing, easy to learn and with a flavor for the period, we got 10+ turns in during our evening game.

The terrain is the usual assortment of Western European buildings, terrain, roads and trees with the exception of the dikes. I used old medium flat rate boxes for the dikes, marking the dimensions to form a trapezoid (with an extra lip to glue the four sides together), scoring the lines with a utility knife and gluing the lip to the final side with Gorilla glue. I spray painted the body of the dike with dark brown and the top with a tan, letting some color overlap the sides. 5 feet of this was easily built and painted overnight. 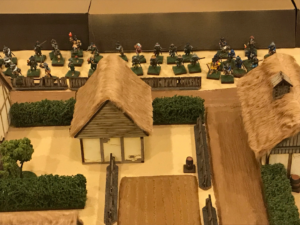 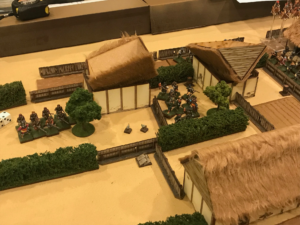 Houses go up in flames (I could not find my cotton/smoke!) This is the best view of the homemade dikes.

The flying Bok make their entry onto the battlefield. 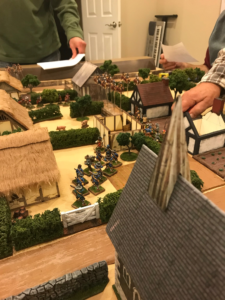 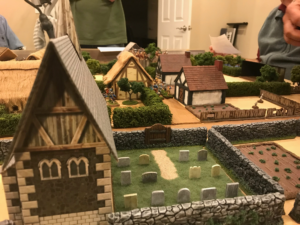 Distance views of the game.

The first turns caught the Dutch forces out of position but reacting well to the Bokkenrijder invasion. The Bok forces were slowed by terrain and the desire to burn as many houses as possible. The northwestern part of the table was aflame by game’s end. Dutch reinforcements came onto the table piecemeal but the Bokkenrijder infantry made steady progress against the more inexperienced civilians. Flying goat riders made their presence felt with their gunfire and ability to incite fear in the civilians, driving them back and stalling counterattacks. Eventually, the ghostly pressure forced the Dutch back, even including an elite Dutch unit, leaving the graveyard open to the Bokkenrijder foot. By this time of the evening/game, we decided the civilian forces could not prevent the goat riders from their objective and called the game. Now that the female denizen was successfully summoned, how long will it be before her paramour, the man in black, is called from the depths to torment the cities and towns of Western Europe? 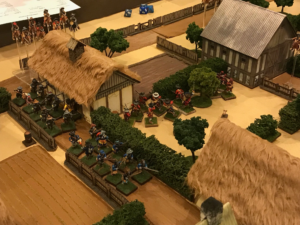 The Bok foot drive up the road on the west side of the town. 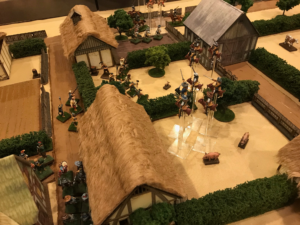 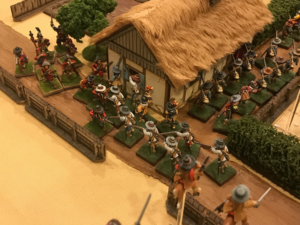 The fight for the center of town was intense! 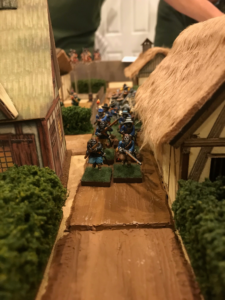 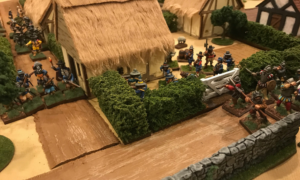 The local Burgemeester’s elite unit on the right is the last line of defense but will not withstand the Bokkenrijder assault coming down the main road.