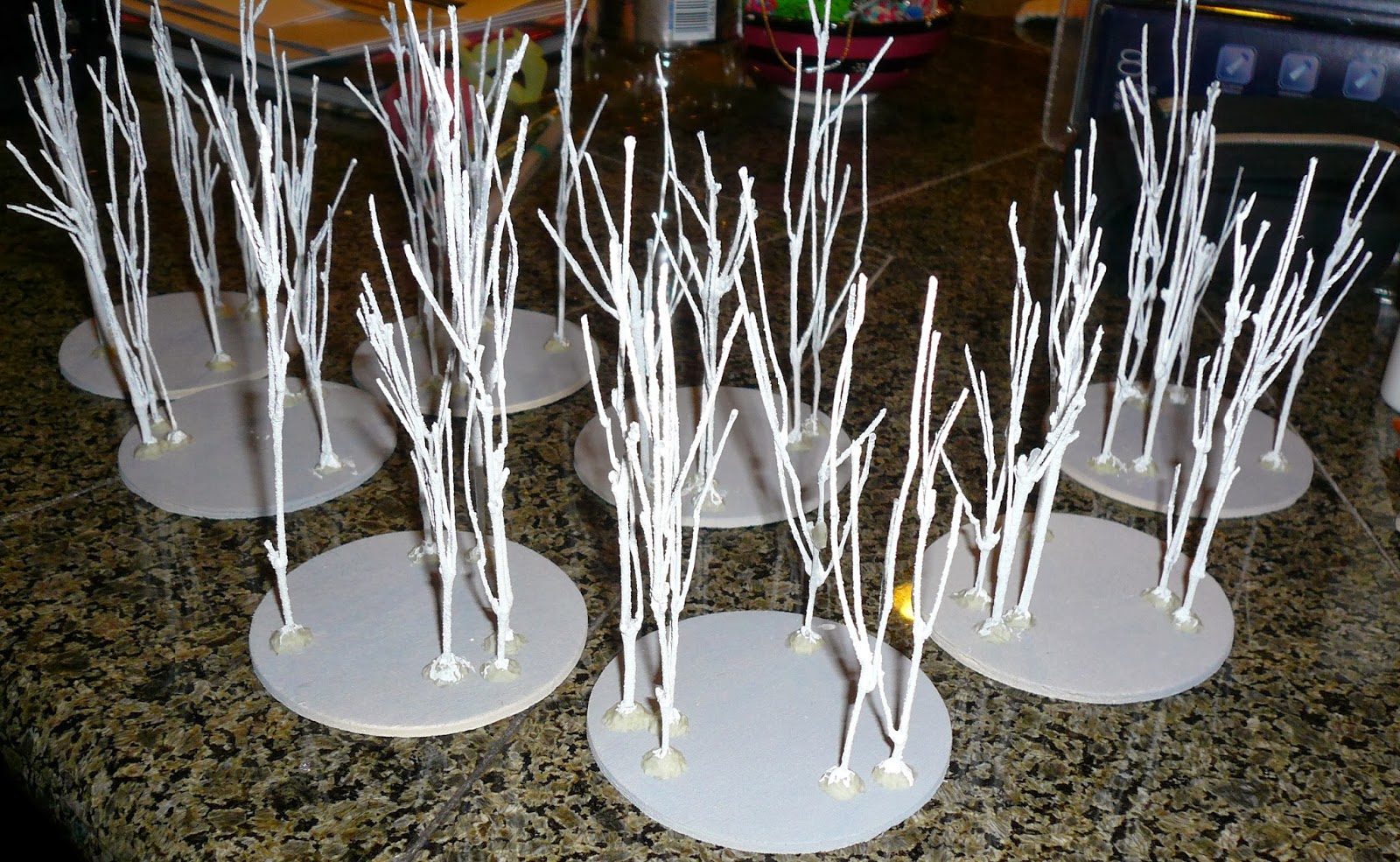 One of my favorite periods is the 1917-23 fighting in Eastern Europe. This time period includes the Russian Civil War and the Russo-Polish War (Polish-Bolshevik War). These wars offer a variety of scenario possibilities from infantry only battles, sweeping cavalry actions, armored trains and assortment of different armored vehicles. Battles can be fought on the flat steppes, in thick woods, ravines and in the sweltering heat of summer or the bitter depths of the Russian winter. The scenario opportunities are limitless!

A part of any good scenario is presentation – properly prepared and period appropriate buildings, fences, terrain, etc. make an average scenario look awesome. In my mind’s eye, I imagined forests of birch trees as something specific to this part of the world. Michael’s used to sell sets of birch trees, however, they appear to have permanently disappeared from both the stores and the internet, except for single trees that are about 6-8inches tall. I lamented having not found more than one group to purchase when I saw some “Bamboo Stems” in the clearance aisle at Michaels. The large stems looked like they could produce many stands of birch trees with only a small amount of effort.

The initial step was to rub off the sparkly stuff from as many branches as possible. My first mistake was

to do this in my painting room while wearing black sweat pants. The sparkles got everywhere and annoyed me several projects later as loose sparkles could be found on my working surface. Once most of the loose sparkles were removed, I used a pair of scissors to cut off individual stems that looked had a “birch tree” appearance that were 3-5inches tall. In no time at all I had a pile of potential birch trees using only two of the three bamboo stems.

Next, I drilled three holes into 3” wooden circles from Michaels. After gluing three birch trees into the

holes using Gorilla Glue I thought I had the stand of birch trees I wanted. Looking at the stand and comparing it to what I saw on line, my copse of trees looked thin and wispy. The pictures online showed birch trees more clumped together so I drilled more holes in

the base putting trees in three areas with one, two and three holes for trunks. While this

design used twice as many trees as the original stand and, thus, half as many potential final stands, I was much more pleased with the final result. Testing this with a Russian Civil War White officer moving through the bunch of bare birch trees looked much more appropriate with this design. 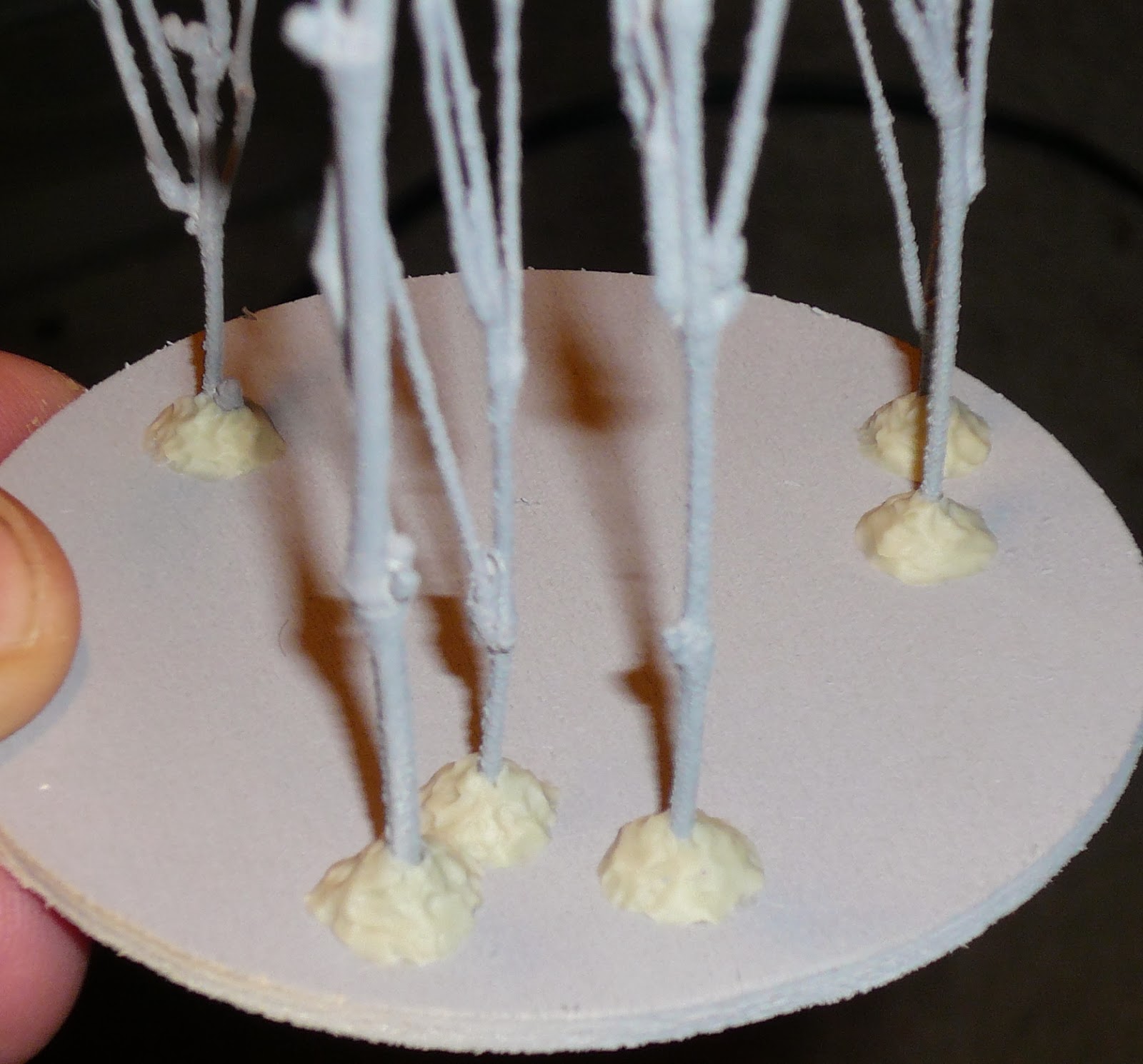 Two of the three bamboo stems provided over 50 “birch trees.” I mixed and matched sizes and thickness to make each stand look a little different. The base of the trunks were reinforced with two part putty like Pro-Create for added strength and left overnight to dry.

Each stand was them spray painted light gray using Walmart’s 99-cent gray primer. The trunks were then quickly covered with white paint using a flat edged brush but not using the dry brushing technique leaving the deeper areas the shade of light gray. A thin paint brush was used to add charcoal stripes around the main tree trunks.

I used a medium brown (Delta Ceramcoat Autumn or Spice Brown) to cover the wooden base and base of the trees. While the paint was still wet I sprinkled a little bit of basing material for texture. Finally, I lightly covered everything with matt spray protectant.

In the end I was able to make 8 stands of trees, each of which with 6 different tree trunks. Each

stand looks different from each other and really looks like photos of woods of birch trees. The time spent making these was minimal and the cost was quite reasonable – the total cost of each stand was about $1.50, especially cool as I could not find any to buy that I liked. All I need to do now is set up an eastern European scenario and try them out for size!

Please check out http://historicalminis.blogspot.com to see more pictures of this project (look in “December 2013” for more pictures).