I am really pressed for time at home. Anyone with a full time job and a family with young children understands the time requirements this involves. I am using this excuse to explain how I missed a very cool Wargames Illustrated article (Issue 314, Nov 2013) on Bokkenrijders – for the obscure few of us who can read Dutch – Goat Riders! Briefly, according to Dutch folklore, Bokkenrijders were ghosts or devils who rode goats, provided by Satan, who could fly. The riding of goats by people who had made a pact with the devil was a long-held belief. Once a year, these people would drive their goats to the Mookerheide, a forested heathland south of Nijmegen, to meet their master Satan. In reality, it was during the 18th century from approximately 1740-98 that criminal gangs and thieves encouraged this belief in order to frighten the citizens in the areas of Dutch South Limberg, Belgian Limburg and Kempen, French Liege and German Herzogenrath. Eventually, the hysteria whipped up by the Bokkenrijders was similar to many witch trials in which a large number of innocent victims were arrested, tortured and condemned. 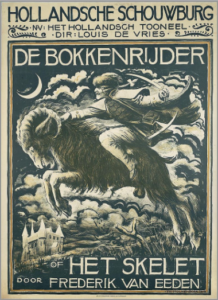 This type of obscure setting suits me perfectly – I have clubmen for my ECW armies, bandsmen for my ACW armies and units to fight the Polish-Bolshevik War in 1920. Obscure and unusual fits the bill perfectly. As an added bonus, I have almost all of the figures I need to run a ghostly goat rider game already. For me this is an amazing find as my slow painting abilities, multiple children (with all the “taxi services” required) and the need to support many college educations have prevented me from building large armies. Well, maybe one side of a large army but not both factions. While this topic of thievery took place in the mid-18th century, the belief in flying goats and demons existed much earlier, so could easily have happened in the 17th century – perfect for me as I own a fairly good sized English Civil War (ECW) 25/28mm set of figures. In what seems to be another fun perk, individual pikemen figures, figures that usually do not contribute much to skirmish games, would be perfect for ghostly figures holding torches. Turning the pages of time back a century does not bother my sense of historical accuracy a bit – for Heaven’s sake, we are talking about ghost men on flying goats from the start, right? For once, I would need to paint up 10-20 flying goat men and about 30-40 foot figures in ghostly form to run a game. I recall playing a Wild West game at my friend Bruce Meyer’s house in which local Chinese gangs were taking revenge on a local town. There were local cowboys, the US Cavalry and some Native American figures participating in the game. When the Native Americans set fire to the local livery store someone complained “Where is the water tower and fire pump?” Bruce simply got up, walked to the shelf, pulled out the appropriate pieces and set them on the table. It was impressive and a hoot at the same time. With the need to only bring out the goat riders, I could do the same thing! 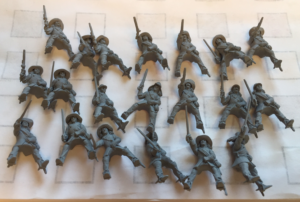 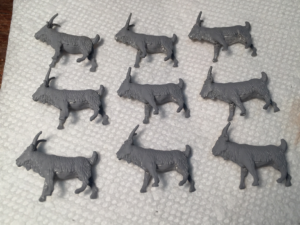 I already owned a selection of ECW foot figures, both plastic and lead, from Foundry and Warlord Games, so I had everything I needed to build my foot forces. The mounted figures would be a little trickier. First, I was able to get a selection of plastic ECW cavalry riders from John Stallard and Warlord Games. Warlord even generously added some extra heads to allow for variety of figures! Next, I ordered 20 goats from Hovels, making sure to explain why someone wanted 20 goats in the first place. From the start, I encountered a glitch in my plans – the Army had sent us from Ft. Lewis, WA to Ft. Carson, CO and some difficult transport decisions had to be made and my ECW figures, buildings and terrain had to remain in WA. With other projects demanding my free time, this project fell to the back burner for about 2 years. Then, it took another 6 months for me to reorganize my stuff after we finally got home to Steilacoom (so – many apologies for taking so long to get this done, John!) While going through the items shipped or pulled from storage, I had a couple early Christmas surprises: I found more plastic sprues and lead figures of ECW foot to use for the project, even finding another obscure sprue I did not know I had, that eventually increased my available foot to 6 units of 10 figures, mostly Warlord figures with some Foundry, as well.

Next, I had to figure out how to “base” the flying goats and riders. Litko (https://litko.net/) makes an extremely varied selection of bases whose descriptions make it easier to match up the correct pole and base. I could not decide whether to have the flying figures 30 or 40mm off the ground so purchased the 40mm high clear rods and bases figuring I could always cut them down if necessary. 30mm ended up looking best; cutting the plastic did not end up being such an annoying task, thankfully. I used a right angle to make sure the rods were mounted/glued to the bases as close to 90 degrees as possible using super glue. I also know that figures like this that are not purpose-built for rider/mount/base would not survive normal wear and tear of gaming so I used a hand drill to drill holes and to pin (actually, paperclips – very handy for pinning parts!) both the goat to the upright pole and the rider to the goat. For the latter, I drilled each rider/goat pair as a set as this process is not 100% uniform and to give a better fit. 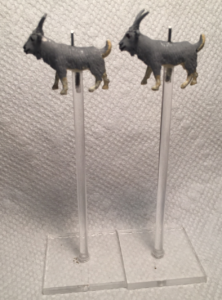 Painting was pretty straightforward, with a few tweaks. Initially, I had painted two test figures with different styles of three part gray schemes – one starting with a very dark gray and ending with a light gray and the other with a medium gray base with final highlights in white. I could not decide which I liked better, so I used them both! Red eyes provided the appropriate “evil” look, as well. Before gluing the goats to their plastic rods, I painted and highlighted their undersides and inner legs first. For the riders, I painted their boots, legs, trousers and buff jacket before gluing each one to their appropriate goat. Both of these strategies helped me keep the paint on the appropriate miniature and not the base. Holding the base while painting the rest of the figures was helpful. Units were painted in similar colors of red, blue, green, white, brown and gray to make unit identification easier, as were units with similar headwear. 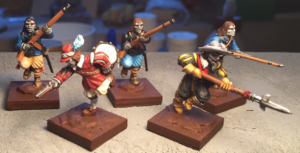 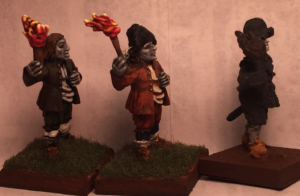 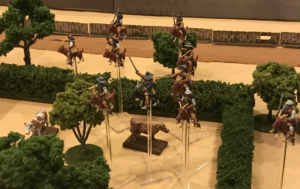 During the progression of this project, I realized that some overall leaders and higher ranked figures were needed. While I had lots of spare Foundry foot leader figures, I realized that I did not have any mounted figures that would be appropriate to lead the growing ghostly army. I found a spare Foundry foot leader that I had not already used to paint up as an overall foot commander. Looking around, I found some Foundry figures that would suit the style I was going for: their Highwayman and female companion would be perfect figures! I know the tricorn is not appropriate for the period but my initial attempts to modify it were unsuccessful; he looked the part so I will overlook that anachronism. He is now the “Man in Black” but I am still looking for an appropriate name for his female assistant (suggestions requested!)

Once all the figures were painted, I needed to protect them. I prefer spray protecting my figures but realized that any spray would make the clear stands opaque and not the look I wanted. The solution was simple – I took a couple straws, cut them into short pieces and sliced them open along the long side of the straw to allow them to fit around the stand (the cut straws actually wrap a little tighter than a regular open straw, an added bonus). I cut ten lines into the top of a used shoe box and slid the figure to the end of the cut slot, making sure the straw part was above the top of the box. A small piece of paper towel protected any gaps and the spray protection process was ready. I was very pleased with the final, finished figures.

For the game I had planned to use a slightly modified “All Quiet in the West Country” that I have successfully used in the past. I had noted some very good reviews about the “Donnybrook” rules which, as a plus, had a section specifically written for spectral creatures like the Bokkenrijders. I picked up a copy from Brigade Games at Historicon and decided to give them a go for this project. I was very excited to finally have this project completed!

Print
Posted in: Games, How To, Painting