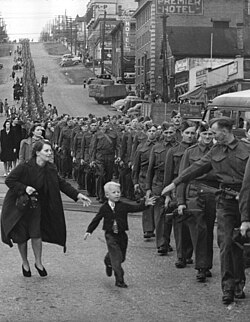 The British Columbia Regiment off to war in 1940. This picture is one of the most famous Canadian war photos “Wait for me, Daddy!” Dad did indeed survive WWII to return to his son.

The British Columbia Regiment has a long and storied past. They (or their ancestor regiments) fought in South Africa, World War I, and across Northwest Europe in World War II. The Regiment was designated the 28th Armoured Regiment and assigned as the third armoured regiment in the 4th Canadian Armoured Brigade, part of the 4th Canadian Armoured Division. They prepared all the way to 1944, when, on 28 July, 1944, they landed in France and started the war in earnest against the Germans. They helped close the Falaise Gap, attacked in Operation Totalize and Operation Tractable. They moved north and fought the Battle of the Scheldt, pushing German units out of northern Belgian territory to secure the path to Antwerp. During this fight, they are credited (along with the Lake Superior Regiment) with sinking several German escort ships (probably E-boats) with tank and 6-Pounder Anti-Tank fire. As the British Columbia Regiment originally started as a coastal defense battery in Victoria, British Columbia in the 1880s, it must have been immensely satisfying to fulfill that roll!

When I first started playing World War II games, I found that no one cared about which Sherman was which. You didn’t have much choice, since the only plastic kits available were the M4A3 from Hasegawa or the M4 from Airfix. Neither was that satisfying. I liked the Hasegawa kit, but you couldn’t find it. But the Canadians never used either of these tanks. I wanted to do a force that modeled what they actually had.

Modeling the British Columbia Regiment for Flames of War will give you a good, solid Canadian Armoured Squadron for late-war gaming. With the advent of the Open Fire! boxed starter set for Flames of War, M4A4 Shermans (or what we would call Sherman Vs) and their Firefly variants (Sherman Firefly VCs) are easy to come by. A normal tank troop will have three Sherman Vs and one Sherman Firefly VC. In Flames of War, that Sherman Firefly VC will be your main ‘cat-killer,’ or big tank killer, for your force. At over 16” range, it can re-roll missed to-hit rolls. That’s very useful and can turn the tide for you. Keeping your tanks at range and ensuring that the Firefly in the troop gets either one or two shots (one if moving, two if stationary) is an effective tactic. You are usually the attacker, though, so count on only getting one shot. 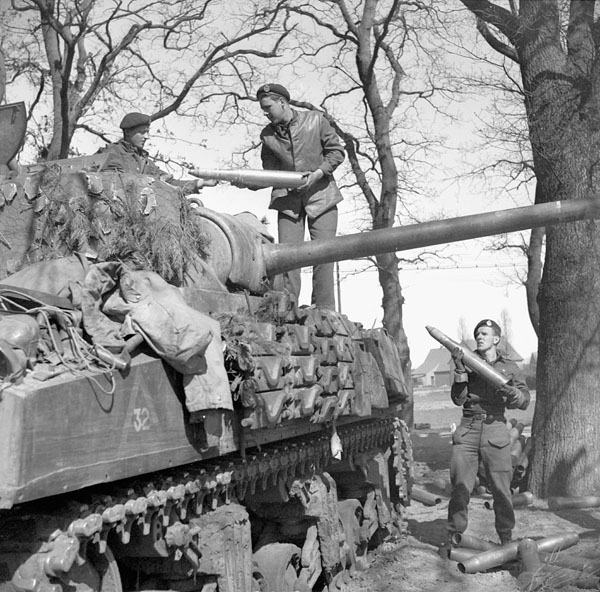 Add a Motor Infantry Platoon (attached from the Algonquin Regiment), a few M10 Achilles (17-Pounder) or M10 Wolverines (3-Inch) tank destroyers and possibly some 6-Pounder anti-tank guns and you have a good attacking force. The strength of the Canadian Army in the field, though, is their re-rolls for motivation or bailed-out tests. The Canadians just keep coming! They also enjoy the excellent British rules and equipment for artillery. An eight-gun battery of 25-Pounders is excellent for doing everything from smoke missions to attacking infantry to taking out formations of light vehicles.

A truly unique piece of kit for the Canadians is the Land Mattress Launcher. It’s a rocket launcher thrown together using an army trailer, air force rockets with army 5.5” gun ammo warheads and a navy launcher system. It had the ability to fire 30 rockets (five to six times that of a German Nebelwerfer) and proved to be devastating. There weren’t many, but they did support the British Columbia Regiment in attacks later in the war (during the Battle of the Scheldt and later). They are uniquely Canadian and provide a wallop to enemy infantry or other targets. Each launcher acts as four launchers, meaning a four-gun launcher can put out the firepower of 16 launchers, giving you a 12” x 12” beaten zone with re-rolls to hit!

I am a bit embarrassed by the Land Mattress Launcher. I’ve been playing World War II games since I was 10 or 11 years old, using 1:76 or 1:72 scale kits. I read everything I could find on the period. I later joined the Canadian Army and after graduating from the Royal Military College of Canada, I joined the technical arm of the army, the Royal Canadian Electrical & Mechanical Engineers (RCEME). I even served at the end of my career as the Regimental Technical Adjutant (read: Maintenance Officer) for the 30th Field Artillery Regiment (the Bytown Gunners). Up until this year, I had never even heard of the Land Mattress Launcher. My jaw dropped when I read the terrific write-up on it on the excellent Flames of War website. I was just blown away. I have no excuses for this, but in penance, I now have four launchers for my Canadian Army in 15mm.

But I digress. Getting the equipment (or models) right for the Canadians is one thing. Getting the paint and markings right is another step ahead that I’d encourage you to try. Painting Canadian troops is simpler than you might think. They have a greener color to their battle dress uniforms, and by 1944, they used a green ‘webbo’ coloring for their load-bearing webbing. I have found Vallejo’s Russian Uniform (924) is perfect for this color, and brown-washing the figure gives it folds and changes the color nicely to that of the typical Canadian in the field in 1944. You don’t have to paint the webbing a different color, as the green was very similar to the uniform color. The wash will bring out the shading to delineate the pieces. This will look greener than the British battledress, but that’s intended.

I thought getting the vehicles right would be very difficult. Essentially, the British and Commonwealth used a lot of US equipment (like the Sherman Vs) alongside their own equipment (like the Universal Carrier or CMP pattern trucks). In April, 1944, the British and Commonwealth adopted color S.C.C. 15 for painting to try and match the US Olive Drab. Many tanks and vehicles that originated in the US stayed US Olive Drab, but quite a few were repainted. Sherman Vs and Sherman VCs quite often were, as they went through the RCEME workshops prior to landing in France, and part of the preparation for combat was correct paint and markings.

It turns out, getting the color correct is rather easy, too. It’s the same color: Vallejo’s Russian Uniform (924). The difference here is don’t wash with brown or else it changes the color. Instead, when you’re finished with painting and putting decals on the vehicle, spray it with gloss. When completely dry, do your brown wash, add your weathering, then dull-spray it. The green color will remain and the model will be well protected and suitably dull, decaled and dirty!

For Division and Regiment markings, use the Flames of War website as your reference. For the British Columbia Regiment, use the following: 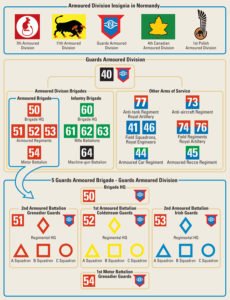 The BCR was the third regiment, so use the red 53. For turret markings, use the following as a guide:

Not all of your troops in your army will be from the British Columbia Regiment, however. Artillery units (like the field guns, Land Mattress Launchers, or even the M10s or 6-Pounders) will have blue-and-red regimental squares, but retain the division’s green-and-yellow maple leaf square. The infantry will also be from a different regiment, so they have a different regimental square.

With a simple but accurate paint job, your army will look really good on the table. Best of luck to you in your future Flames of War games (or any other game system, for that matter) with your British Columbia Regiment tanks and equipment. May they do you proud!

Print
Posted in: Historical Information, How To, Painting