Converting a Japanese Command Figure to a Senior Officer

Converting a Japanese Command Figure to a Senior Officer

One of my active projects is the WWII Pacific theater. My Japanese infantry are almost complete with only small extra bits required to finish it. I have plenty of infantry that can represent the standard rank and file soldiers as well as unit commanders. I looked at the Osprey books that I have I noted that all senior or field grade leaders had knee high boots. However, I did not have a figure that looked like a senior officer or leader. With all the great figures available, what kind of figure would look more like a senior officer?

All the spare, unpainted Japanese figures that I owned had low quarter shoes and puttees. Converting the calves from puttees to boots was quite simple. First, I trimmed the ribbed puttees down and the transition between the puttees and shoes with an X-Acto knife. I then made a mix of Pro-Create with less hardener than normal (instead of 50/50, I used a 40/60 hardener/resin blend) to permit easier smoothing after application. Using a Type 5 sculpting tool, I applied the Pro-Create to the figure’s calves. I made a smooth surface by using a wet (water or saliva) flat edge along the new “boot.” A wet fingertip is also useful in smoothing transition points like those around the ankles. I used the blade edge of an X-Acto to mark the sharp edge of the top of the boot and the trousers.

Painting the figure was the most fun part as I got to experiment with different colors. A darker jacket and white gloves will make this officer stand out on the gaming table. 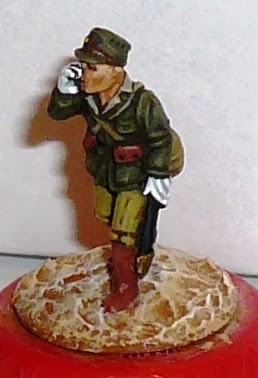 Print
Posted in: How To