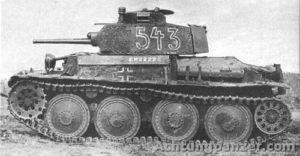 I remain a proponent of all things out of the ordinary. Maybe my likes are not as obscure as NHMGS President Kevin Smyth’s, or as extravagant as NHMGS Treasurer Bruce Meyer’s, but I do like things that are not mainstream. My English Civil War armies have clubmen, my WWII collection has continental/European Italians and my ACW armies have a band. I cannot explain why, but there you go. As part of the “out of the ordinary,” I am a big proponent of wargaming the early war in Poland, France and the USSR. I like the feeling that my vehicles can survive hits from other vehicles and that single shots from 88mm guns will not turn my painstakingly painted tanks into burning hulks after only one turn on the gaming table.

Early war tanks have their own cool characteristics that are enjoyable, too, from both the Axis and Allied points of view. Imagine Polish tankettes or the well-made Polish 7TP taking on German PzKw I and II tanks, or the variety of French vehicles or the early Soviet tanks. The scenario opportunities are amazing: massed German armor vs dispersed Allied armor is the traditional scenario with an endless supply of variations. Awesome “what if” scenarios exist to see what could happen if the French massed more of their armor; a fun scenario I have always wanted to run is one in which the German tanks first encounter the T-34 and the ensuing panic that it caused.

With so many fun games to be played, it has to be determined what was really available on each front for each campaign. For this article, I will start with the German armored fighting force. Statistically, an event that has less than about 5%, or two standard deviations from the mean, can be considered rare. Less scientifically determined, vehicles that were present between 5% to less than 10% I considered uncommon. Why 10%? I figured that 10% was a reasonable cut off as players might want to know the chances of a vehicle being available on a 1 to 10 scale. I also needed a third category and this seemed to work well. It’s pretty simplistic, but, as I said, it worked in the end.

The table below lists the number of tanks for each model and each period: Fall Weiss, Fall Gelb and Operation Barbarossa. The numbers in parentheses represent the percent that these vehicles would be involved in each campaign.

Looking at the percentage numbers, there are three colors: green, yellow and orange. Green represents vehicles that were common or available in large numbers for the campaign. Vehicles in yellow were uncommon and those in orange rare. Looking at the individual tank models, there are three shades of blue – navy, royal and sky (Robin’s Egg Blue for those of us who are Phillies fans!) – and one in red. Navy blue reflects tanks available for all three early war campaigns, royal blue for two of the three and sky blue common for only one campaign. Red indicated this vehicle was considered rare for all three campaigns.

The chart revealed interesting information. The Germans were not able to replace losses sustained in the Polish campaign in time for the invasion of the west in May 1940. The workhorse of the Wehrmacht from 1939-41 was the diminutive PzKw II, something I had not considered. While there was a mix of short- and long-barreled PzKw IIIs in June 1941, all of the PzKw IVs were short-barreled models. The stolen Czech 35t was not available for any campaign in significant numbers; the Czech 38t was common only for Barbarossa yet more common than the PzKw IV.

It is a little out of the ordinary, but there is a lot of carryover from one period to the next. The Wehrmacht’s tanks were primarily gray during this period, simplifying pre-game preparation. My OCD will not force me to paint the brown/gray German paint scheme for 1939 as it was not used at any other time in WWII. Great variability is possible when putting together scenarios for the time period 1939-41. I hope others will come to appreciate the fun of playing this time period as well.