For King and Parliament Rules

For King and Parliament Rules 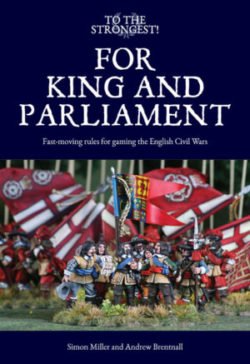 By Simon Miller and Andrew Brentnall

The rules are 78 pages long with multiple black and white pictures and period wood carvings interspersed between sections, four pages of color in-game pictures and an index to making specific sections easier. Each rules chapter is headed by a quote by participants in the English Civil War (ECW). Of note, the rules are extremely well written, clear and easy to understand with examples of the rules included. Best of all, when I did have a question, the author provided clarifications right away. My Royalist heart is warmed by the cover which features a picture of the King’s Lifeguard on it. The rules are suited to all of the Wars of the Three Kingdoms from 1639 through 1651. Cost: £9.99/$13.00 for the PDF version.

The rules are well organized/prepared and are among the best/clearest rules I have ever read. Simon’s willingness to answer questions enhances the quality of these rules. I was very pleased with how the rules played, for the way they give a “feel” for the ECW and the ability to play a game to a successful conclusion in a few hours.

Two items that set the rules apart from others that I have played include the ability to play a “diceless” game using playing cards and the use of the “square grid”. My friends prefer rolling dice (as do I!) so did not take advantage of the playing card option. While the square grid can seem artificial, recall the numerous boardgames played using hexagons and consider the following – with square grids no one will argue about discrepancies in movement, if a unit is/is not in range or if the charge qualifies for a flank attack. After two plays of the same scenario, I found that the system worked quite well (I playtested the scenario in the rules before running it with friends, using some old advice: “The first time you play a rules set, make sure you played it before”. 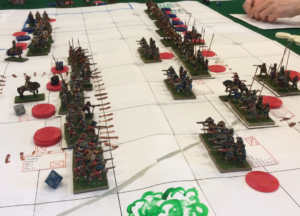 The battlefield set up – a little low tech but it worked for the playtest. 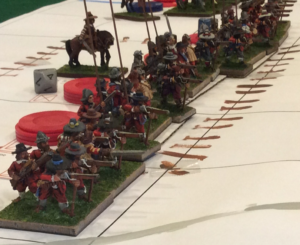 The rules begin with a brief introduction to the rules mechanisms and designer’s notes, both of which are very useful for those new to these style of rules and period of warfare. For those with existing armies, basing does not particularly matter as long as the units fit inside the confines of the box. For me that was another advantage to this rules set as I hate rebasing figures – all that work and, in the end, you do not have any new figures!

Armies consist of one or more brigades, each led by a general. These brigades can be combined to form groups corresponding with the army’s center or wings. Leaders play a role in activating the brigade or individual units; in the scenario included in the game there are several brigade with no leaders or ineffective leaders and their management is significantly more challenging than others with leaders. Leaders can also re-roll an activation roll for a unit under his command. In a game turn the active player may move their Leaders and then decide which brigade or units in a brigade he wishes to activate. Units activate on a die roll of 2+ on a d10 with potential modifiers based upon the movement attempted or quality of the unit. Units that successfully activate may move, shoot, charge, rally. While a 90% chance of passing the activation roll sounds extremely easy, from experience, gamers will be surprised to see how often a 1 is rolled at a critical moment. Units may be activated more than once per turn, however, each subsequent roll must be higher than the previous activation roll to be successful. If any unit in a brigade fails its activation roll, the turn is over for all units in the brigade. 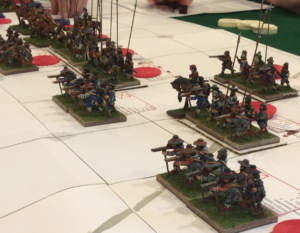 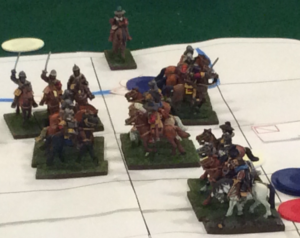 The Parliamentarian horse hit the flank.

There are multiple movement options available to units, however, larger units attempting to perform more complex movements will have modifiers to the activation roll, making these movements more difficult to successfully perform. Diagonal movement is permitted. Fire combat is similar to other games where the firing unit has a chance to hit and the defender has the opportunity to save, both on a d10. Special fire like long range, double fire and salvee charge are options available to certain units. Small tokens are used to represent available ammunition allowing special fire; when they are used up the unit may still fire but with slightly reduced abilities reflecting a slackened rate of fire due to exhaustion, fouled weapons, etc. – a nice touch! Flank or rear fire shots offer double the number of dice rolled to hit. Units that receive a hit are disordered. When the total number of hits match the unit’s “Hit” value, the unit is “Lost” and removed from the table. Charge movements take into account the differences between “Dutch” horse (preferring to shoot pistols before charging) and “Swedish” horse (preferring to charge – described as “Gallopers” in other rules systems). Foot may charge foot but not horse units. Horse units may charge any unit, however, only Swedish horse may countercharge. The appropriate die per unit are calculated and rolled and appropriate hits applied to the enemy unit. A neat special rule for horse is “Dash” – dash markers allow units to add an extra die in the melee. Horse units that destroy other units must pursue – an event that happened all too regularly in the ECW. Pursuing units are very difficult, but not impossible, to rein in. This also has a period flavor as most horse units were not involved in multiple charges against multiple units. Flank or rear charges offer double the number of dice rolled to hit – when adding in dash markers, this can be considerable! Units may also attempt to “Rally” to remove hit markers as an activation option.

As stated earlier, the rules are among the clearest written rules I have ever read. Each section is full of examples of play, making the learning process much easier. There is an entire chapter that gives an example of extended play of the game. There is also a chapter for Extra Rules (Garrisons, Officer personalities, the Royal Standard, etc.) which provide added flavor and uniqueness to each game. Point value charts and Army lists are provided to permit players to run their own games. While the rules contain Army lists for 1642, provisions will be available for players to download other basic lists for other periods/armies for free. The “Battle of Montgomery, 1644” is included in the rules to allow players to try a smaller game before attempting anything more ambitious. There is a list of suggested reading for those who wish to learn more about this very interesting period of military history. A free PDF version of a Quick Reference Chart is available at: https://bigredbatshop.co.uk/

I really enjoyed playing these rules and am looking forward to playing a larger scale battle. The ECW is one of my favorite periods to game. As the pictures show, I will need to get smaller game tokens and set up terrain better – in my own defense, I wanted to get a game in quickly so I could review the rules after seeing friends play the game so prepared the battlefield using a “low tech” manner. The rules play appropriately to the ECW period, rewarding good tactics and strategies appropriate to mid-17th century warfare. The rules are easy to learn, easy to play and are fun. For King and Parliament rules really do give a very nice and realistic flavor for the period of the Wars of the Three Kingdoms and are highly recommended.