Lead into Gold – Accounting, not Alchemy

Lead into Gold – Accounting, not Alchemy

Alchemy – lead to gold, or in our case, lead to figures

This article is reprinted, with permission, from the Enfilade 2010 Yearbook and was written by an author who wished to remain anonymous. The information presented is very enlightening and provides some insight into the accounting related to miniature figure lines.

I have been in the business of manufacturing toys for wargamers for just under a decade.  There is not a month that goes by that I don’t get multiple inquires like these:

Now, if that many people write or call in, I have to believe that there are an awful lot more who carry the same opinions but never vocalize them. I am going to take the next few paragraphs to explain why there are no 28mm figure manufacturers who jet over to Paris for lunch.

There are maybe 20+ sculptors worldwide who do a credible job sculpting historical figures for a living. By that I mean guys who have an innate understanding of body posture and are historically well versed in weapons and uniforms. They are also cognizant of how to sculpt for ease of casting and painting. There are several mediums in which sculptors work. The finished product is called a green after the color of one of the more popular putties.

The cost of a green for one figure can range from $175 to $250 or more depending on the complications involved. For instance, a Napoleonic Grenadier takes much more work than a Vietnamese peasant. A series of weapons that also have to be sculpted from scratch can also add to the costs.

Production casting would seem to be the simplest piece of the process. Anyone who has tried a home casting kit knows the truth. Getting a mold to completely cast every bayonet to its point and every toenail in good definition is just one level below magic. The variables of metal temperature, pressure on the mold and spin time are unique for each mold. Each time the mold is spun, it heats up and the variables may change. Even the best casters never approach 100% yield. 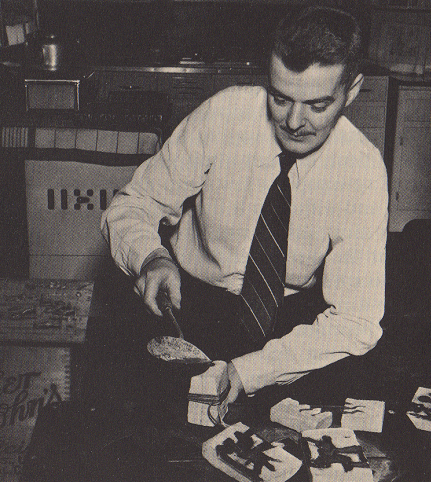 Casting, the old fashioned way, when men were men, they wore ties to wargame and did not worry about the effects of molten lead at 621.5F on their bare hands.

Okay, so I have just received my figures in the mail from the caster. They are spread out on the table and now I have to put them in clamshells with a piece of foam backing and add a descriptive label and pricing. Finally, they are available for sale on my web site. Sales for new figures are always best during the first year of their release and tail off significantly thereafter.

Let’s work through the request for WWI American squads in partial French gear. These would be relatively simple figures, so I’ll use $200 a figure for sculpting. There needs to be enough variation to build several squads without everything being look alike. Sixteen total figures will all fit in a single mold.

While it is true that a 28mm figure may only contain between 22 and 28 cents worth of lead, the expense of the casting process takes into account all of the investment in the machinery, miscasts, and the caster’s time. For our purposes, I’ll add 10 cents to represent all these investments for a total of $.38 as my cost per figure. As a retailer and a wargamer, I like to build my forces in platoons. In this case, one command pack and five rifle packs, 34 figures, builds that platoon. The raw cost of casting that platoon is $12.92. However, I have actually expended a total of $3,432.92 for that first platoon, so $100.96 per figure is the cost for this platoon.

Figure lines are built in the hopes that popularity will eventually make them economically viable. In the example above, the magic number (breakeven) works out to be 65 platoons or 2210 figures in sales, based upon a $2.00 per figure price. Please note that these raw numbers do not take into account one minute of my time initiating, telephoning, researching, packaging, or quibbling with potential buyers. These numbers also do not reflect the hard costs of shipping along the production cycle, packaging materials, advertising, or the 3% charges for PayPal or credit card orders. What are the true breakeven and profitability numbers? If one were to look that deeply, there would be a lot fewer manufacturers out there.

As you can see, the number is almost 400 individual packs and that is just to break even! Most figure packs really only approach this number by the end of the second year, and then traditionally generate just enough profit to start the next set of figures. Recall that the lion’s share of sales occur during the first year, after which sales become only marginal.

Do not forget that those numbers are for direct sales. Should I offer these figures through another retailer I would receive 40%-50% less because of the wholesale pricing. So, 28mm figure manufacturers not only do not jet to Paris for lunch, they often have to scrounge nickels and dimes to eat at McDonald’s.

One note regarding another very common query: customers will often state that they consider the cost of command packs and support weapons unfair. That is, they are a higher cost per figure, or that the packs contain fewer figures but cost the same as larger packs. These packs, by their very nature, sell fewer packs than rank-and-file packs by a ratio of one to four or one to five. That is all that gamers need to make up their forces, yet the command and support figures cost the same to produce as the rank and file. These specialty figures will never achieve the higher sales volume to recoup their expenses, which is the reason for their higher pricing.

I need to mention yet one more fly in the ointment. When these figures are announced, there will be the inevitable inquiry along the lines of “I’d love to buy the range, but I’m waiting until you have support and heavy weapons available.”

All of the numbers presented are averages and estimates. They can and do vary by economic conditions, raw material prices, foreign exchange rates, and sometimes the phases of the moon. These numbers do represent a reasonable explanation and insight into the cost of making miniatures in today’s market.

Print
Posted in: Editorial, How To