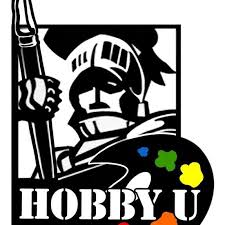 I was late. It happens. It happens more than I’d like, but I needed the sleep so I slept in on the first day of HMGS’s Fall-In convention. My first stop, after registration, was the HMGS Hobby University. I have friends there in the instructor cadre, and it’s always fun to see them.  I did my rounds, saying hi, but keeping it brief, as most of the instructors were busy teaching classes.

I came to Dorothy Catapano, one of the owners of the world-famous War Store (http://www.thewarstore.com). She and her crew not only run one of the best game stores on Planet Earth, she’s a fantastically talented painter, and instructs at many of the HMGS Hobby University sessions. She was teaching a class on base painting and initial coloring for 15mm Flames of War models. There was an empty chair with some models, primed and assembled, but otherwise untouched, and I smiled weakly. Dorothy took pity on me. “Yes, you can join us, but you have to commit to the whole series of classes.” I, of course, readily agreed. She explained that this class was one of four, all linked as a “Boot Camp” for 15mm Flames of War figures. I am a terrible painter, and any chance to improve on painting these little figures would be well received. I need all the help I can get! 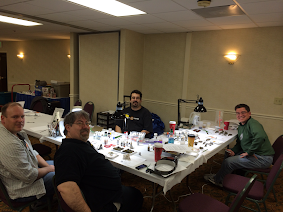 By agreeing to participate in the classes (two Friday, each two hour and two Saturday, each two hour), then you would receive a primed and assembled boxed set from Battlefront. You could either do mid/late war WWII German artillery (four leFH 18 guns, staff team and observer with Kubelwagen) or mid/late war British artillery (four 25 Pounder guns, staff team and observer with Bren Carrier). So here’s the kicker, you get to keep these models at the end. The cost of the class? Free! Really – no kidding! With support from Battlefront, the entire class was free, and you got to keep your well-painted gems at the end! It was a deal I couldn’t pass up. I plopped down and grabbed a paintbrush.

Dorothy obviously meant Canadian 25 Pounders, vice British. I knew this because as I was painting mine, they were obviously from 15 Field Regiment, Royal Canadian Artillery (part of 4th Canadian Armoured Division in Northwest Europe, 1944-45). At least that’s the army I’m putting together, and that’s how my guns will be depicted. So she meant Canadian guns. No, really.

The first class, Dorothy’s, was to paint all of the guns, the carrier and the bases. I painted the bases brown, the guns Vallejo Russian Uniform Green, the same for the Bren Carrier. The bases proved challenging, because there’s a lot of detail on them. Sandbags, brick walls, a motorcycle up against the wall, and other details. They were fun to paint. The green I used is very good for S.C.C.15, the green olive drab that the British and Commonwealth forces used in Europe. I added a brown wash and it brought out the details very nicely. 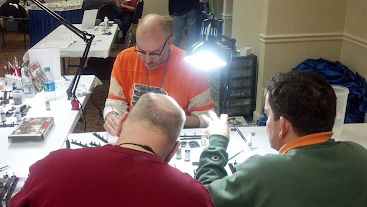 “Dirty” Jon shows us his technique for 15mm figures.

The next class was by the podcaster “Dirty” Jon of WWPD’s Podcast fame. He took us through painting all of the gun crew, officers and observer stands. The figures were glued to popsicle sticks for easy handling and primed black. I dry brushed the figures with the same Vallejo Russian Uniform Green, and then very lightly dry brushed a lighter shade (by adding some Vallejo Khaki) and instantly it looked like I had shaded the figure. All the straps, gators and holsters were Vallejo Khaki, and the flesh was a light flesh. Once the whole figure was brown washed, it really looked good. Finally, I painted weapons and equipment (like binoculars) and a few details on the motorcycle dispatch rider and I was done! 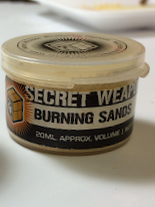 Weathering was up next. I’ve dry brushed some mud color before in my earlier days, but this was the first time I’d gotten to use Secret Weapon weathering powders. I was totally impressed. Others in the class used darker browns, followed by lighter browns to give a “I’ve driven through muddy water” look to the lower sides. I went for a dusty summer look, and used only the lighter shade. I kept it on upper surfaces for a dusty look, and heavier on the lower road areas for a “just driven down a bunch of hot roads to get here” look. These pigments were excellent, and I highly recommend them.

The last class was to base the figures that we’d painted. We carefully peeled the troops that we’d painted from the popsicle sticks and then glued them to the supplied Flames of War bases (small base for observer and command, medium base for staff team, and the gun bases for the guns themselves). We didn’t add any static grass or sand, but that’s my job to do at home (I guess it’s my homework to finish off the project).

British and Commonwealth batteries generally contained eight guns. I now had four completed. My new pal Dave, who sat beside me painting the exact same guns for his own set, admitted to me late on the first day of the classes that he’s here just for the painting techniques. He doesn’t play 15mm Flames of War, but instead prefers Bolt Action in 28mm. Craftily, I offered to buy his completed gun troop from him (painted to the exact same standards and color scheme). He accepted (and ran off with his ill-gotten loot to the dealer room for some very fine 28mm WWII figures). I, in the meantime, giggled with glee at the fact that I now had a fully painted eight-gun battery of 25 Pounders, ready for my mid-war Canadian 1st Division, or my late war Canadian 4th Armoured Division. 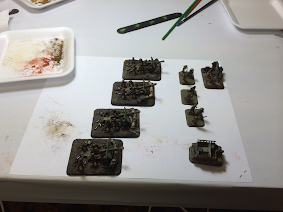 I can’t thank HMGS Hobby University and Battlefront for the figures and the invaluable lessons. The dedication of the HMGS Hobby University instructors is second-to-none. They go all out to help you. They provide the brushes, paint, pigments, weathering powders and everything else in between. They are always the highlight of my visit to any Historical Miniatures Gaming Society event.

3 Comments on "Painting at HMGS Hobby U Boot Camp"