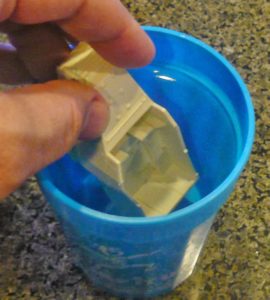 Resin is the new metal for many reasons: it costs less than metal to cast and is lighter and cheaper to ship. Occasionally, resin parts appear slightly bent or warped, and when that happened with metal, those misshapen or bent parts were simply pushed back into place. Pushing resin that is out of shape will break the part, right? No, not necessarily, especially when using the ‘Hot Water Trick.’

Oddly shaped parts on resin models can be changed, especially if warmed. The method used is, remarkably, quite simple, yet is very effective. The method I will discuss here will help turn what looks like a ruined model into one that looks normal. 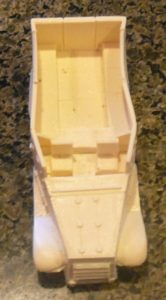 I had a US halftrack resin model where the rear wall was bowed inwards. Ruined, right? Wrong! I took two cups, one filled with cold water and one with hot water (as hot as the tap could produce). I placed the rear of the model into the hot water for about 30 seconds. Removing the resin from the water I merely pressed the bowed wall with my thumb to where I wanted to position it and held it in place. While holding the wall in place I dunked the model into the cold water to speed the setting process. Once this was done I evaluated the  change. Sometimes this process needs to be repeated to get the desired result. Also, I sometimes found I needed to hold the wall a little past where I wanted it to end up in order to compensate for a little rebound in the resin as it tried to return to the original misshape. 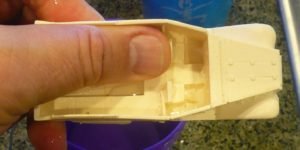 As you can see, the final halftrack body looks fine. It’s ready to prime, paint and put on the gaming table, that is, if I can get through the many other projects I have waiting in front of it! 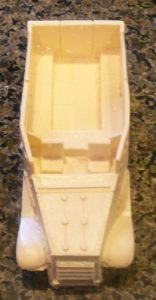 Print
Posted in: How To

1 Comment on "Fixing Resin Models With a Hot Water Trick"