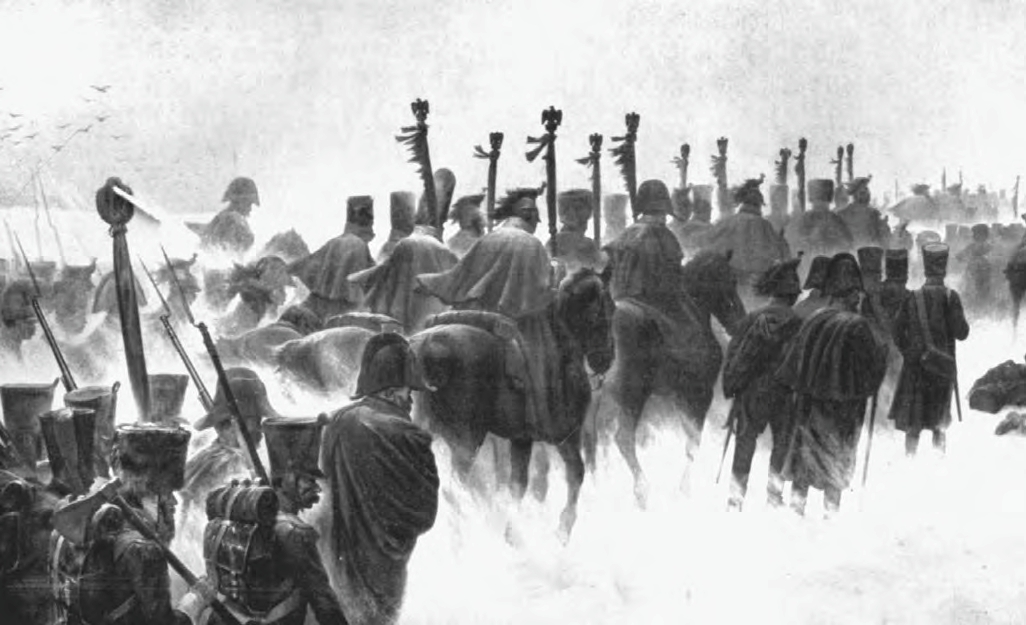 Compared to everything else – researching the figures, cleaning/painting the figures and making lots of neat extras – the search for a good rules set to support skirmish gaming was the most challenging part of the entire project. Bruce Meyer and I looked at many different rules sets that likely work very well for the reason they were designed (Capitan, Muskets and Shakos, etc. – I even dug out a classic set by Donald Featherstone to no avail). Regardless, we could not find something that suited what we wanted to accomplish. We were looking for a  simple set of skirmish rules that were easy to learn, yet gave a good impression of both the Napoleonic era, specifically related to the French retreat out of Russia in the late fall of 1812.

Bruce is the great mind behind rules and scenario writing. I am not a great lead idea maker but am a much better co-captain, offering suggestions and tinkering with the concepts he produced. So, following much thought during his post-Enfilade trip to Hawaii, Bruce came up with a home-grown set of rules entitled: “Back to Vilnius.” The statement on “winning” should sum things up: “Victory conditions will depend upon the scenario played. The French can never win outright; a French victory is simply survival and the ability to plod along another day toward safety. The Russian players will strive to win points by killing and capturing Frenchmen and stealing their supplies.”

The French troops are described as “Good, Fair and Poor.” The Russians are “Cossack, Regular and Peasants.” Note that these are not different names for the same troop qualities – while the good, fair, poor status does follow the traditional thought process for skill, ability to do things and/or perform under fire, the Russian categories are class specific. Peasants represent enraged locals with little training who will take advantage of attacking weaker opponents but are easily deterred, regulars are the standard line Russian foot and Cossacks are fast moving horsemen with good morale but also looking for targets of opportunity and easy pickings. 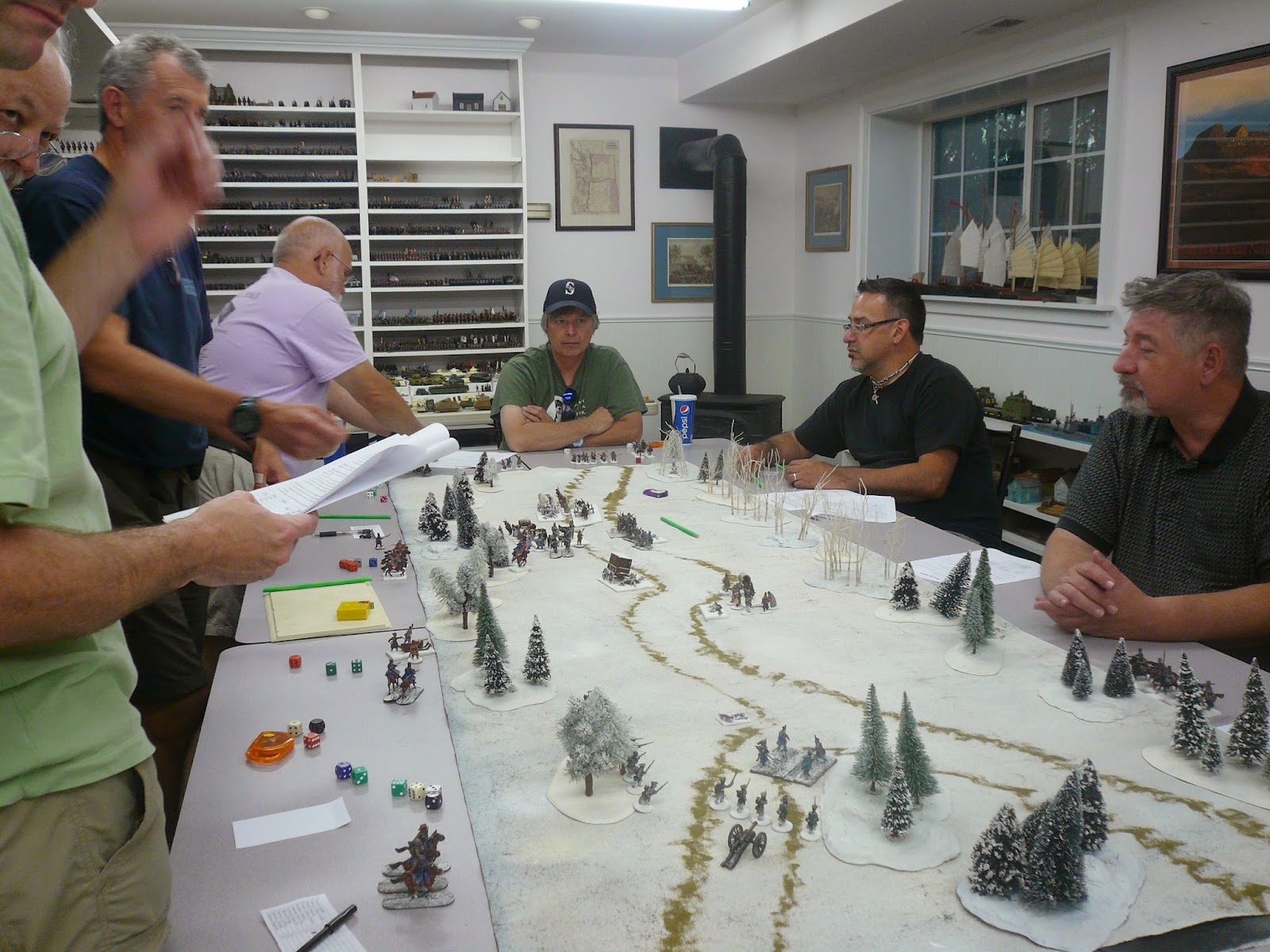 At the time I am writing this article we had just one playtest under our belts before I left Washington State for Colorado Springs. We did alter the rules based upon 1) the results of the game, 2) the impressions of our friends and 3) what we think works best (meaning we have the right to ignore the second point…  )

Some Questions & Answers with Bruce:

Historical Minis Dot Com: In your opinion, why did you choose to develop your own rules instead of using established rules?

Bruce A. Meyer: We are living in a golden age of figures and rules. Gamers can go in almost any direction they can conceive. Independently, four of us locally came upon the Perry “Retreat from Moscow” figures at about the same time. As gamers are want to do, we all ordered figures, wagons, scenery and started painting. We accumulated substantial forces and then the light bulb came on. Just how were we going to use these in a game?

How many sets of Napoleonic rules are out there? There are definitely hundreds, maybe thousands if you count all of the tweaks and homebrews. Almost all of them are traditional line of battle rules whether they use battalions, brigades of divisions. I knew from the beginning that that was not the game we were building. This was not to be your standard Napoleonic encounter and there didn’t seem to be a readily available set of rules to replicate the situation we were looking to simulate. 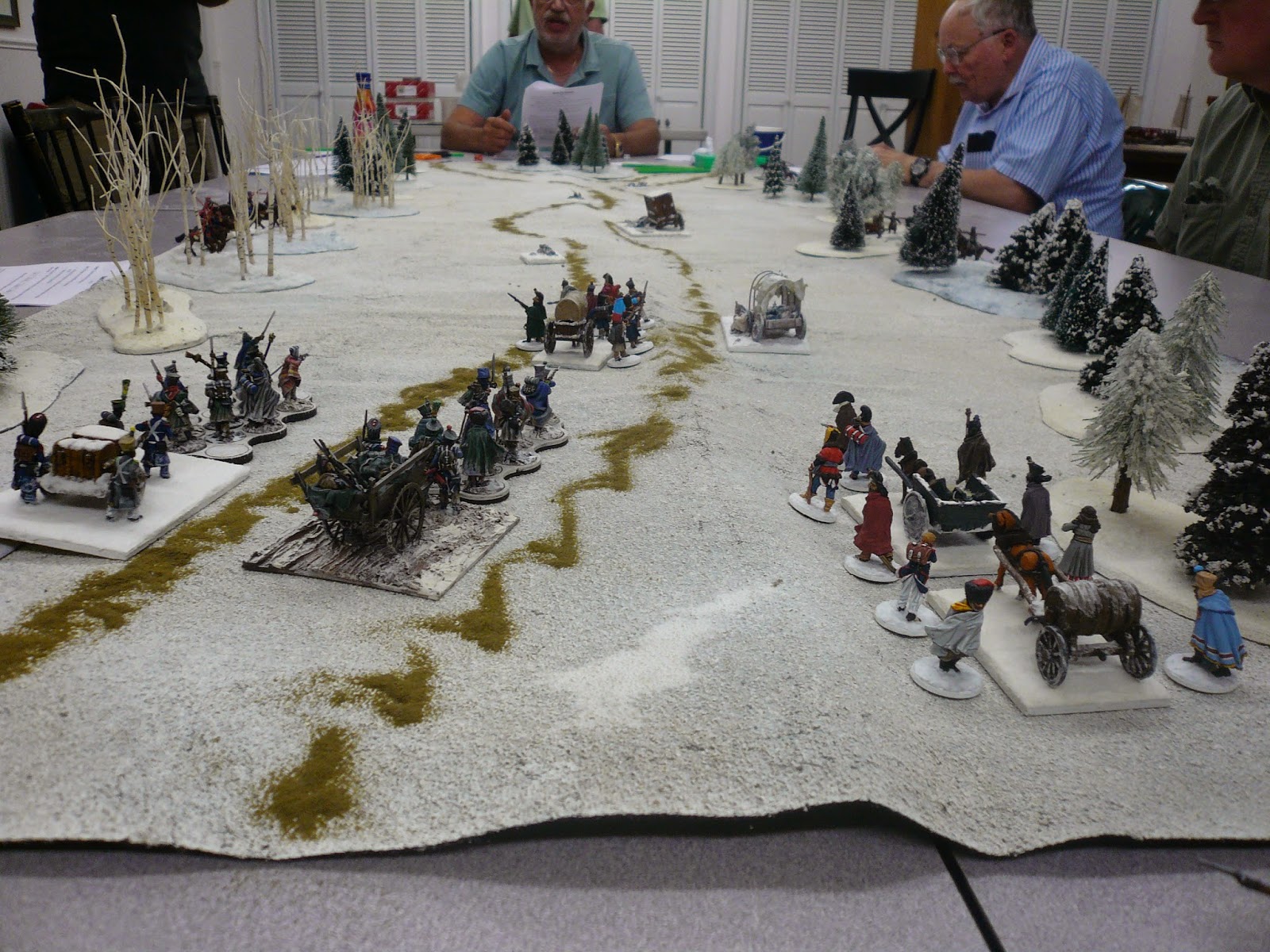 Straggling French columns enter the board. 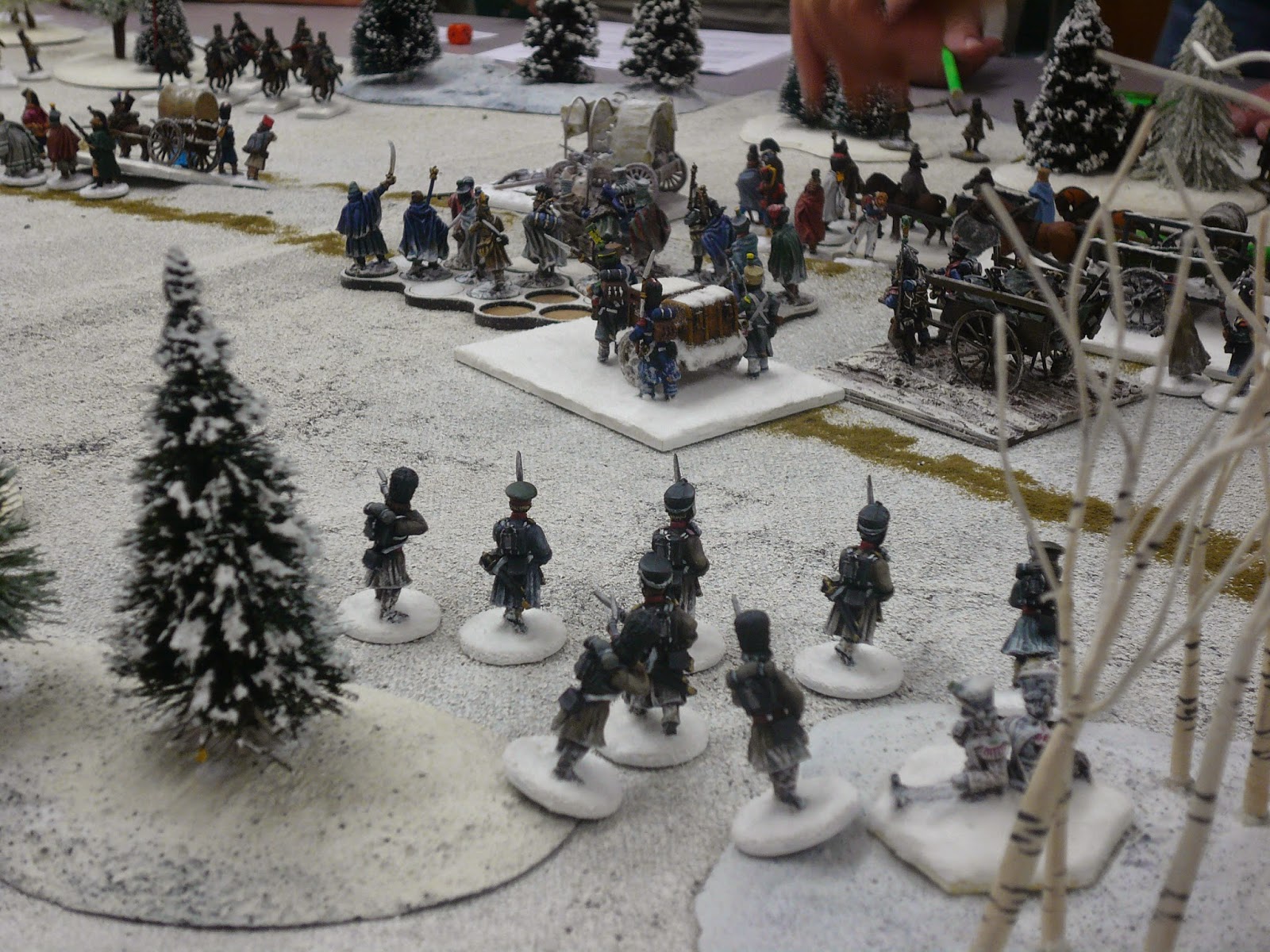 HMDC: What were you trying to reproduce by writing your own rules?

BAM: Practical playability and reasonable simulation – those two things are what I enjoy in a game. A pleasant evening’s game requires a balance between the two. Any discussion regarding the tradeoffs between them could run pages and pages. Suffice it to say that the group I game with much prefers rolling dice to hunting down obscure paragraphs in the rule book.

We needed a game that put the French players in a desperate situation from turn 1 and reward aggressive Russian harassment of the column. From the rules:

The Grand Armee was defeated and in headlong retreat. However, there still existed within the ranks a gross disparity in conditions. Some retained their mounts and many had wagons and carts full of booty looted during the advance. The Emperor had his guard. Some officers maintained at least  a modicum of discipline for their depleted units.

The Russians had also suffered greatly and were in no way capable of contesting the retreat in conventional military fashion. Instead, they relied upon the wily and free roaming Cossacks. These horsemen harried the flanks of the retreat preventing foraging and capturing the dropouts. There were units of regulars that had been sent to pester the flight. These would not have been in much better condition than their intended victims. Finally there were the peasants. They had suffered during the French advance and unwilling to endure the same during the retreat.

From the start, it was assumed that we would play a long, strung-out French column slowly pushing their way west, subject to continuing harassment by Russians. The French struggle to keep together. Their train is a mixture of carts and wagons carrying food, ammo and booty. The Russians abruptly appear out of the wood and strike, killing, capturing prisoners and seizing carts. The French resist desperately – to lose food and supplies is a death sentence. The game is a contest between the various Russian players to see who can wreak the most havoc. There’s a point system for Russian success. The best the French can do is a moral victory by exiting the far end of the table.

BAM: Weather is a major factor for this game. Driving snows, thaws, ice and drifts all affect sight lines and movement distances. Uncertainty is a big part of this game. To keep things relatively simple, we kept the quality variation to three grades for each side: basically Good, Fair and Poor. Wheeled vehicles and sledges are just as important for Victory conditions as the troops. If the Russian can deny the French their food, ammo and shelter, they have accomplished their goals.

Anything that adds undue complexity without adding to the overall feel of deep winter skirmishing was cut out. 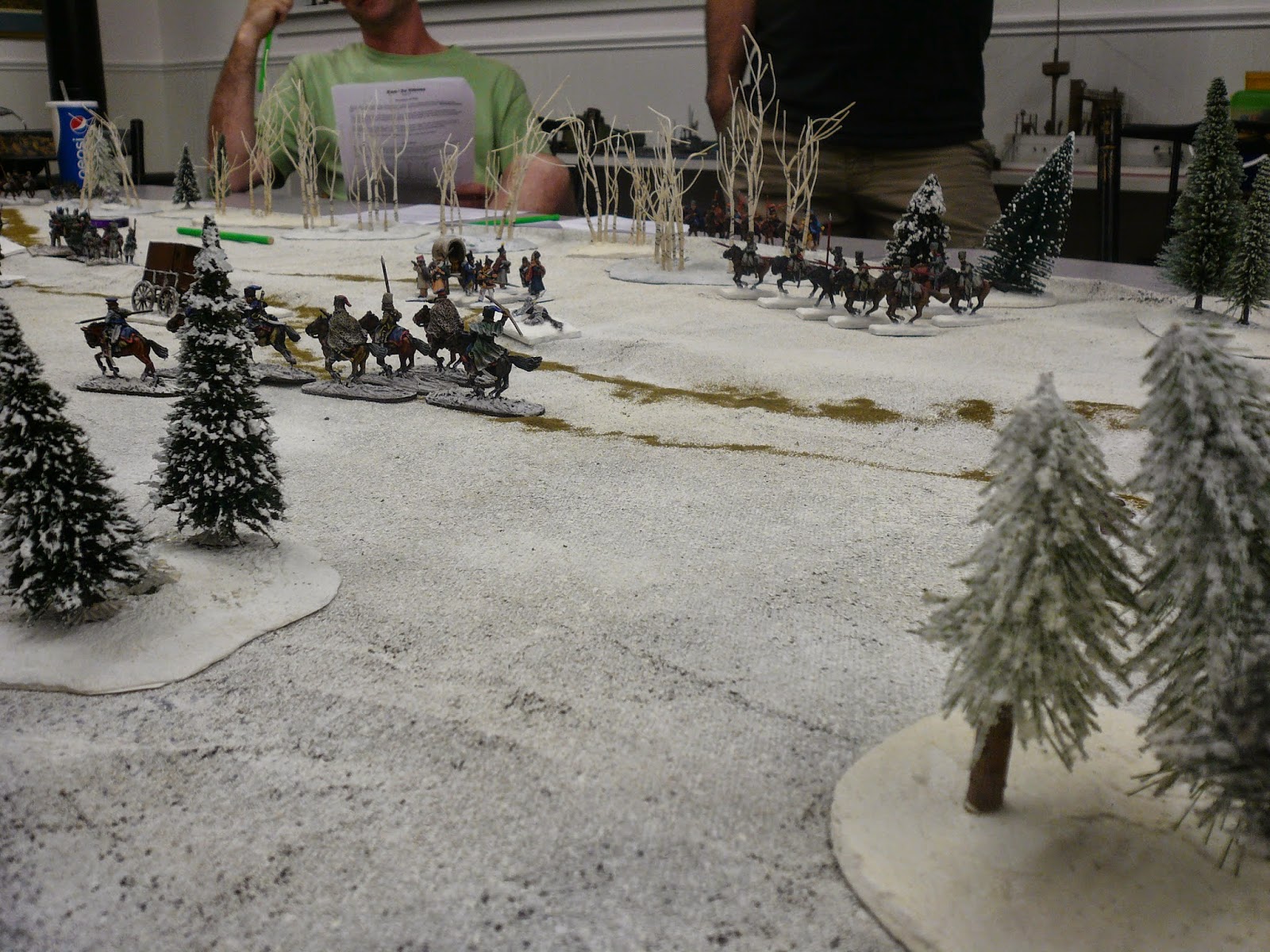 More Cossacks emerge from the woods!

HMDC: How long did it take you to put these rules together?

BAM: That’s almost impossible to say. For something as off-the-wall as this, it is the accumulation of lots of reading, studying pictures and perusing of existing rules. That results in a collection of snippets and scraps of concepts. Then one day, you have enough to bring them all together as the core of a set of rules.

HMDC: From previous experience gaming with you using your rules, you seem to hit about 80% of the mark right from the start. To what do you attribute this success?

BAM: Dumb luck. If one puts enough thought into the strategic view, the foundation isn’t particularly difficult. The work is in getting the interaction of each side’s units with each other and then pitting side vs. side to achieve what you’re looking for. The hardest part is making things “gamer proof”. Various units have differing strengths, weaknesses and abilities. These are meant to guide gamers to specific actions by recognizing and playing to advantages and against weaknesses. That envisions rational play by the gamers. Enough said.

HMDC: What worked well with the rules? What did not work well? Did you make any “in-game” alterations to the rules? Why?

BAM: The game looked good. The outcome was a near-run thing in spite of the French firepower being too strong. This was exacerbated by the Russian tendency to charge straight home rather than maneuver for tactical advantage.

There were some clarifications but no real alterations. Given that it is a dice game, it’s important to wait and differentiate what didn’t play well because of a rule issue and what didn’t go well based on excellent or poor die rolls.

HMDC: Were you pleased with the results of the rules and game?

BAM: A good time was had by all. 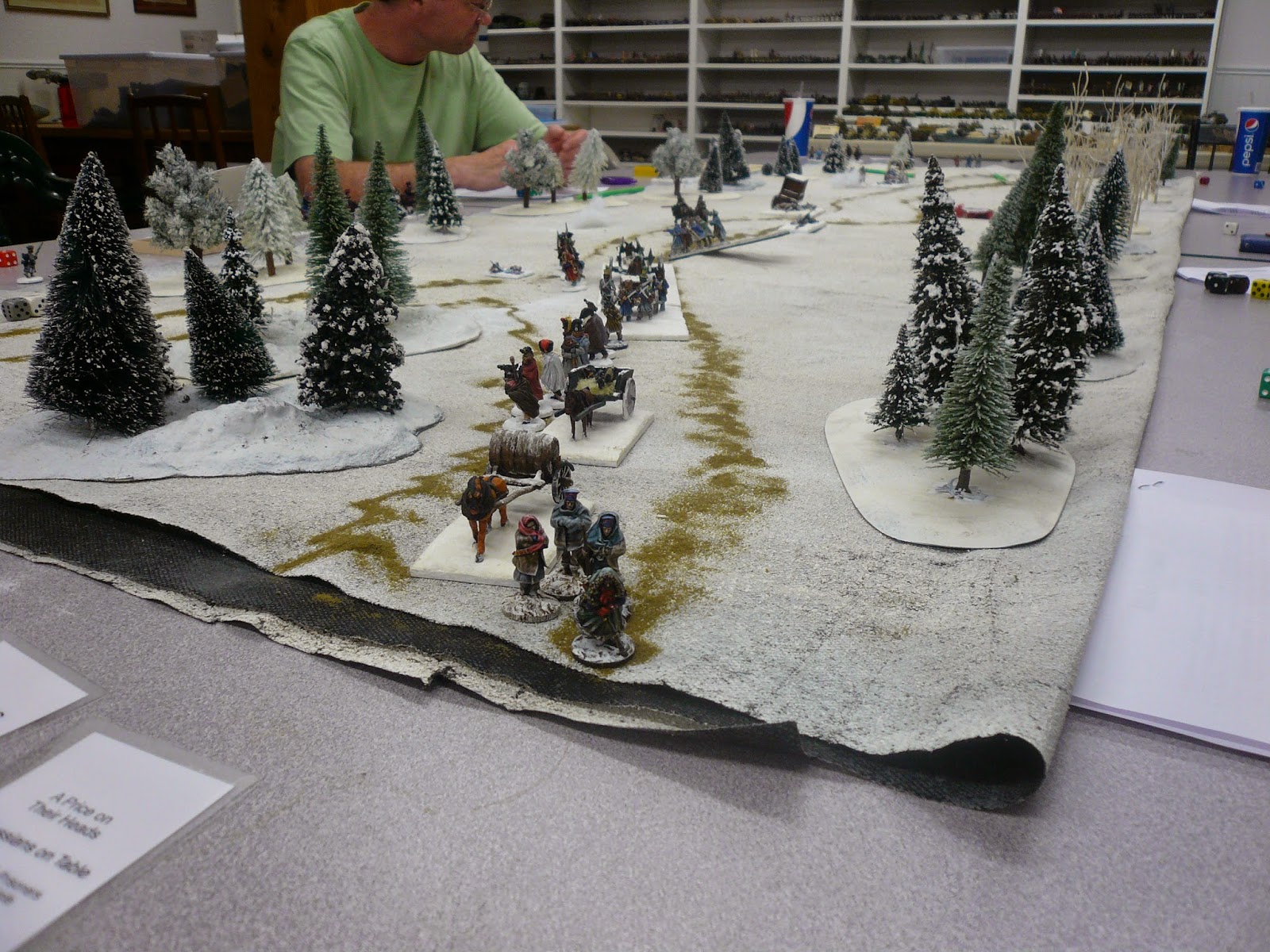 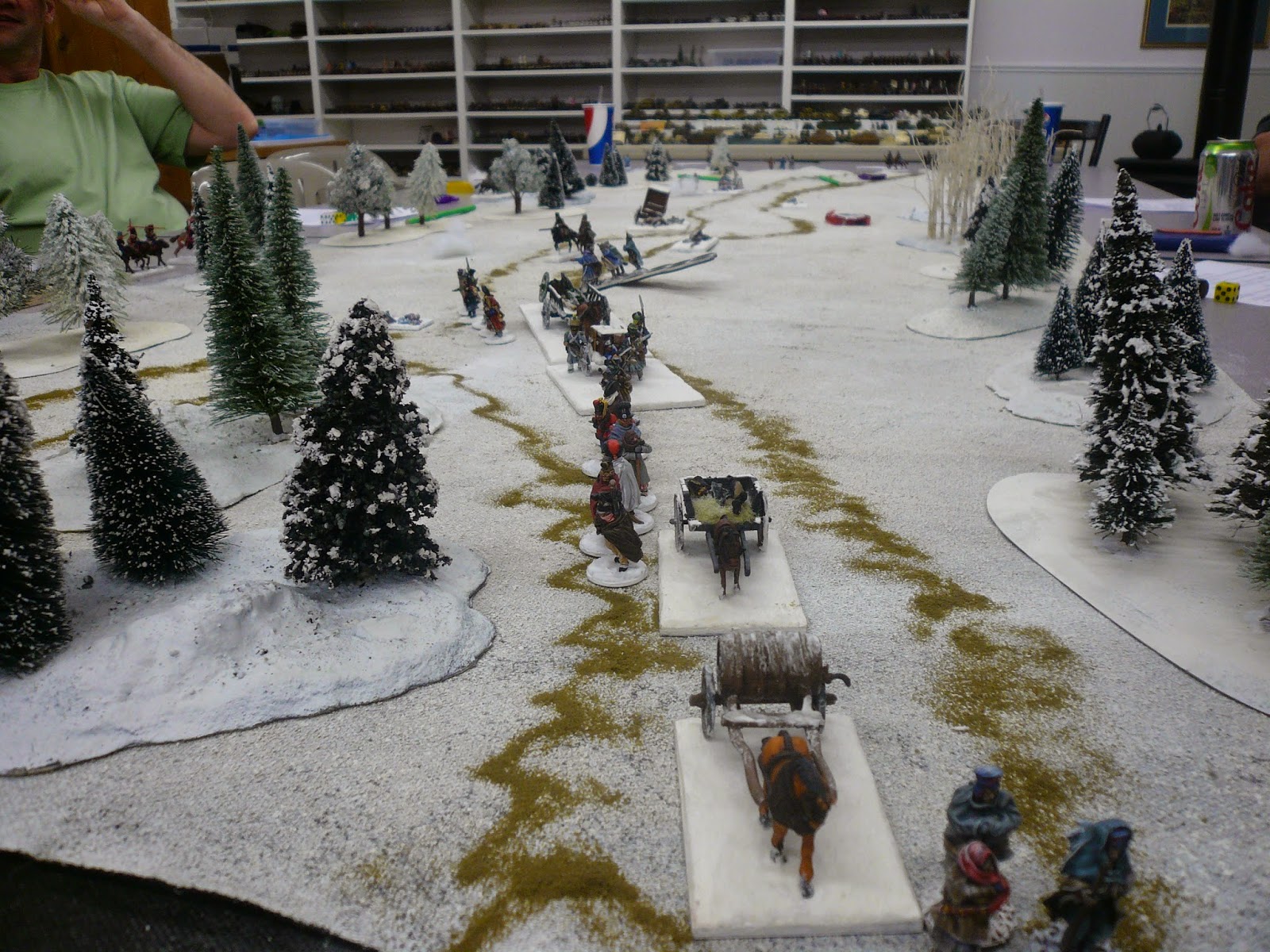 HMDC: What thoughts do you have for future versions of the rules? How will you work in things like French cavalry, Marbot’s sleds and Napoleon’s carriage?

BAM: There are some loose points to tidy up, some consideration to be given to optimal unit size, and some factors to be adjusted. All in all, we are probably 80%-90% there and with two more play tests will be very close. Ideally, introducing more quality French will be easily offset by increasing the number of Russians coming on the table.

Many thanks to Bruce Meyer for his candid remarks. In a recent visit he and I sat down to discuss more refinements to the rules. I am looking forward to Beta Version 2.1 sometime soon!