While doing the original gun emplacement, I was working on another gun pit, as well. As I mentioned in Part I of this series, it always helps to do projects like this in pairs so that when one is drying you can work on the other (and if you have extra bits of stuff that are time sensitive items, like Pro-Create, you have another place to use it). Please note that many of the techniques used here were described in more detail in the first article; please refer to it for additional information. 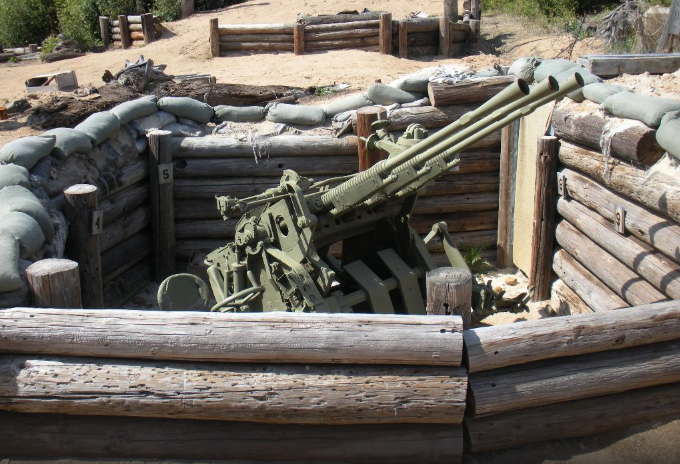 For the first article in the series, click here.

I found a cool photo using a Google search (Japanese emplacements WWII) showing a gun emplacement that was very interesting – it was not uniformly built, had lots of palm logs of different heights and had a unique presentation of sandbags. I really like this photo and thought it really had character, demonstrating what an island gun emplacement could look like. Note – even though these were designed for use in the Pacific theater, they can be used in other wargames. 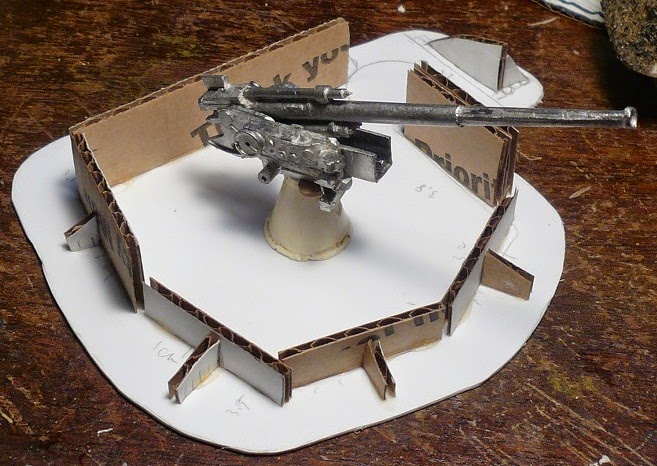 Outline of Emplacement with Gun 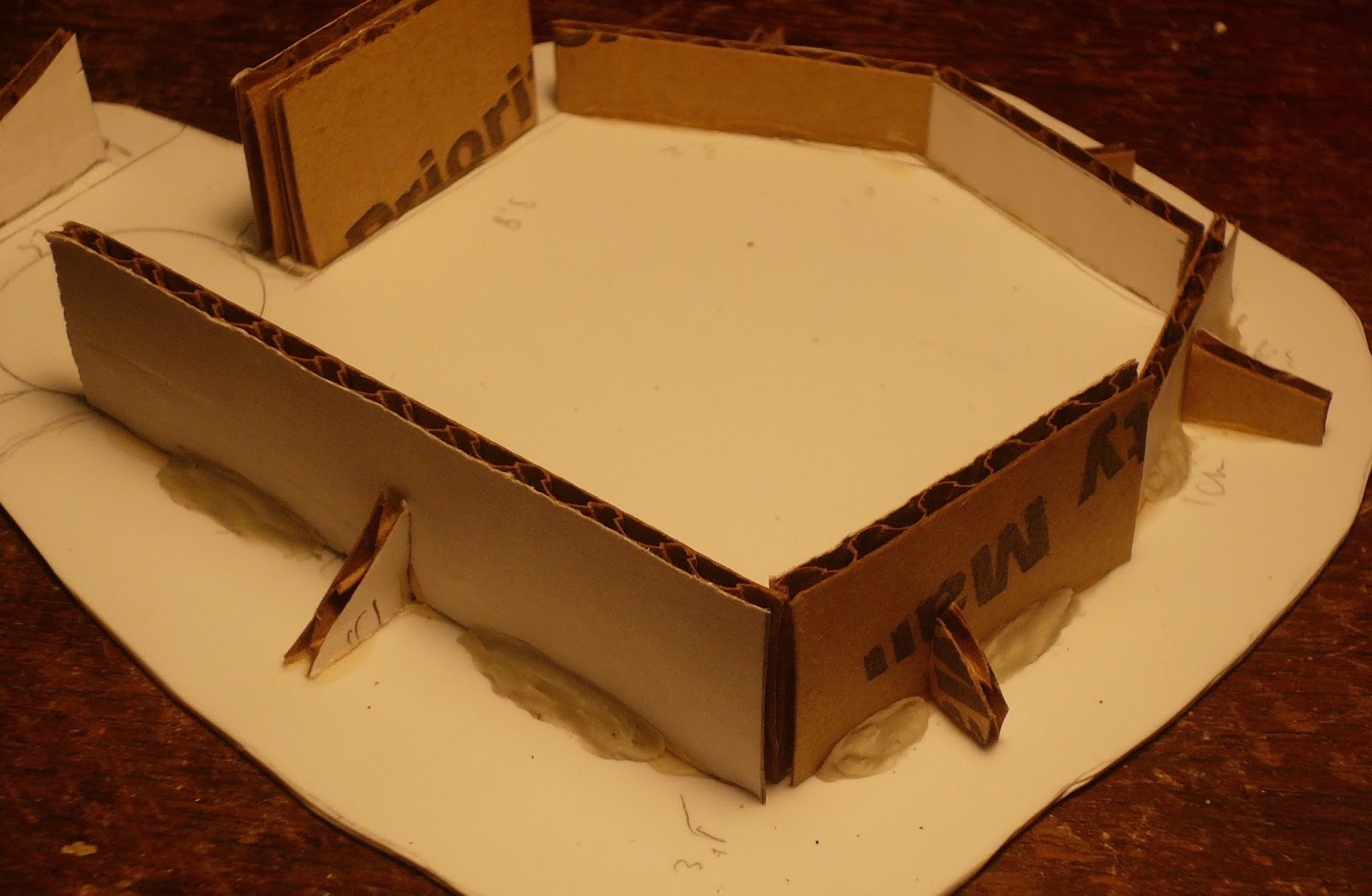 Back View of the Emplacement

As with the first emplacement, I used an already painted stand of anti-aircraft figures to make sure it would fit well (not snugly) inside the gun pit, ensuring I made allowances for the added thickness of the “bamboo log” walls. I then drew lines on some thick sheet styrene, making one side wall and the front wall angled in the middle. Excess/scrap thick cardboard works very well as the template for the walls. A double thick cardboard wall was glued on the side that would be next to the blast wall; lower height cardboard was used in the front. Gorilla Glue and some 90degree angles helped stabilize everything. 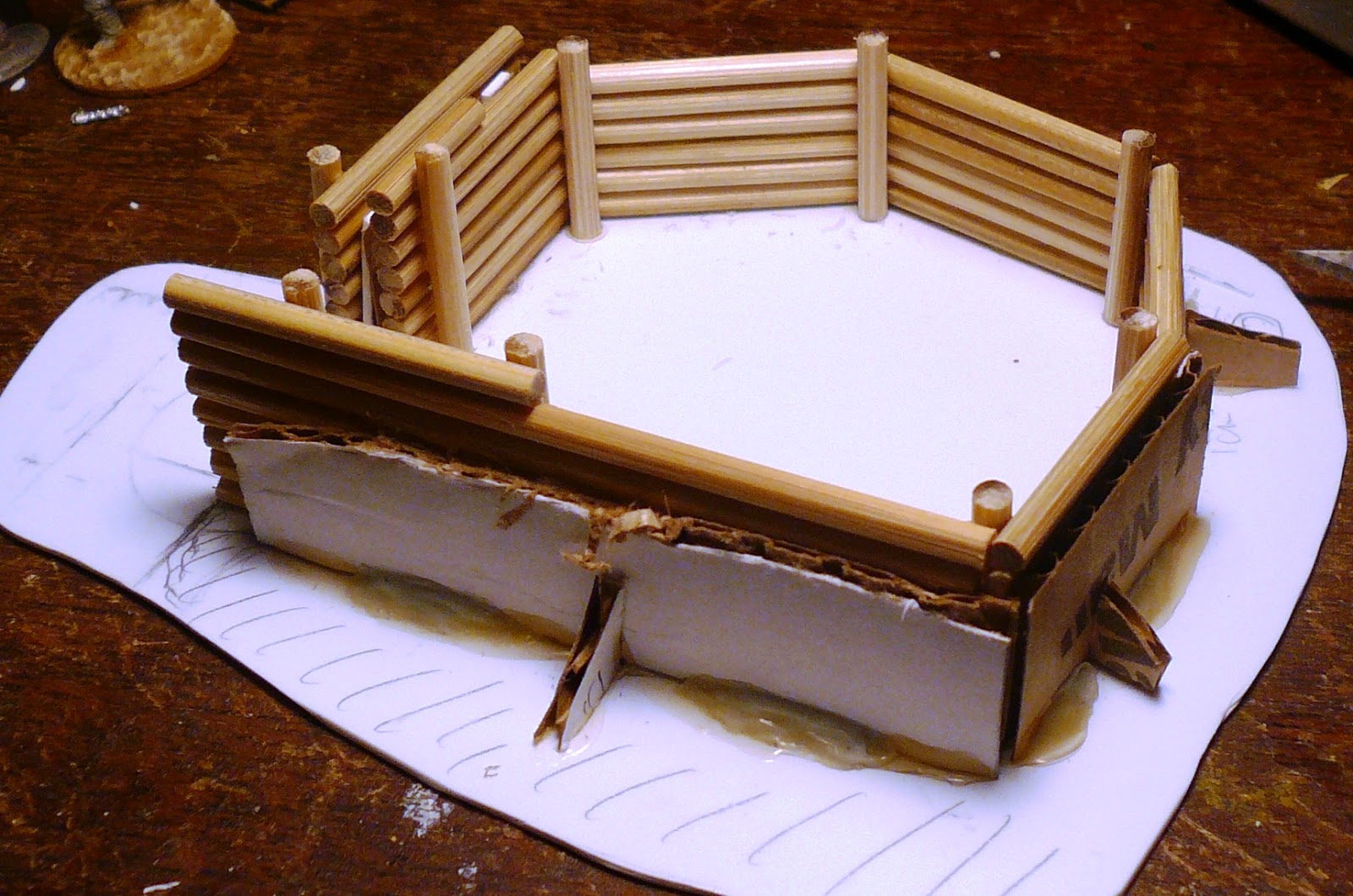 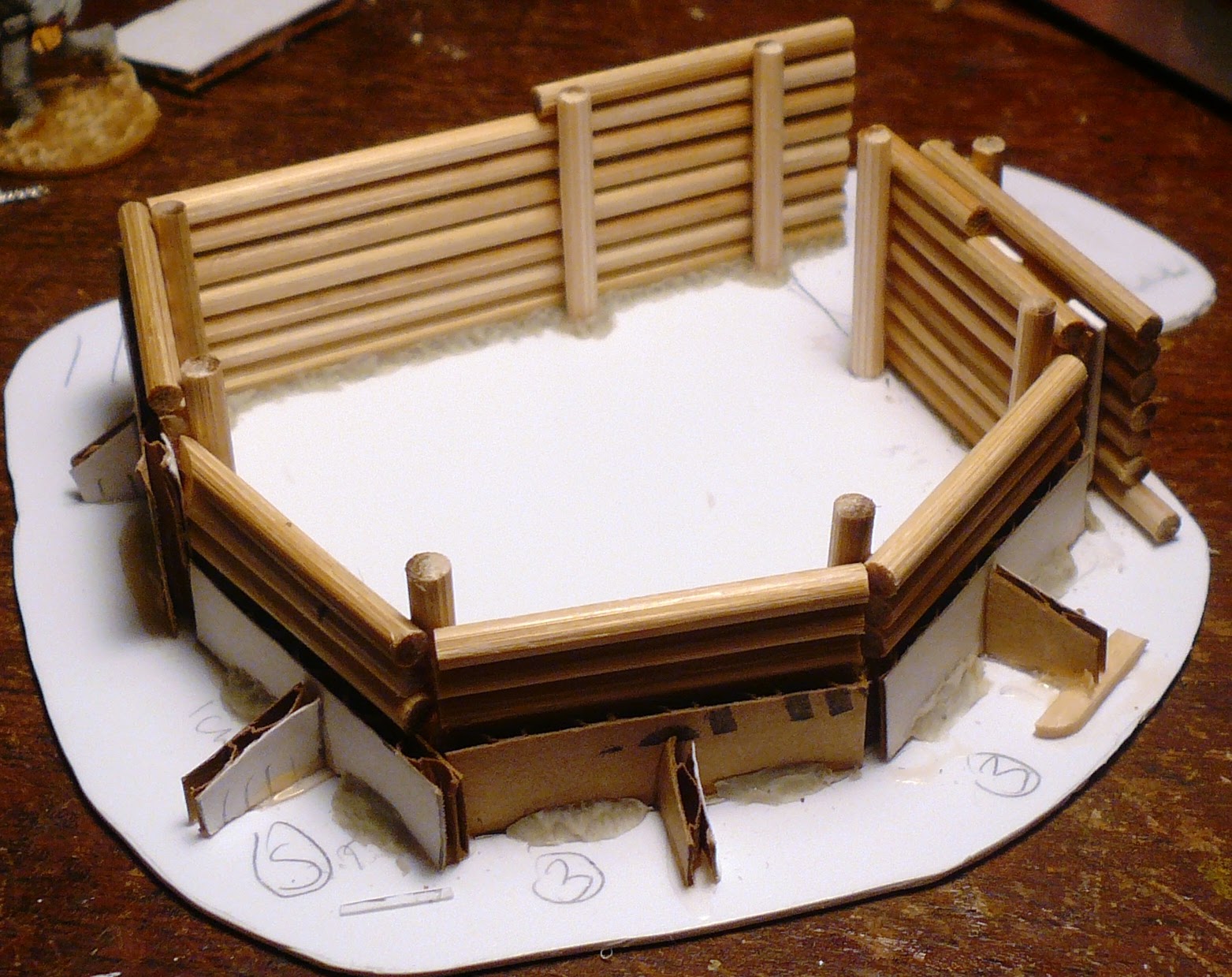 Dollar store bamboo skewers work perfectly to represent bamboo logs. I cut pieces with a razor saw to the lengths I wanted and simply glued them onto the cardboard. Vertical supports were added in strategic places for both support and to look cool. I took some ProCreate and used a thin amount to seal the inner, bottom part of the wall and to hold the outer wall together. I let this dry overnight. 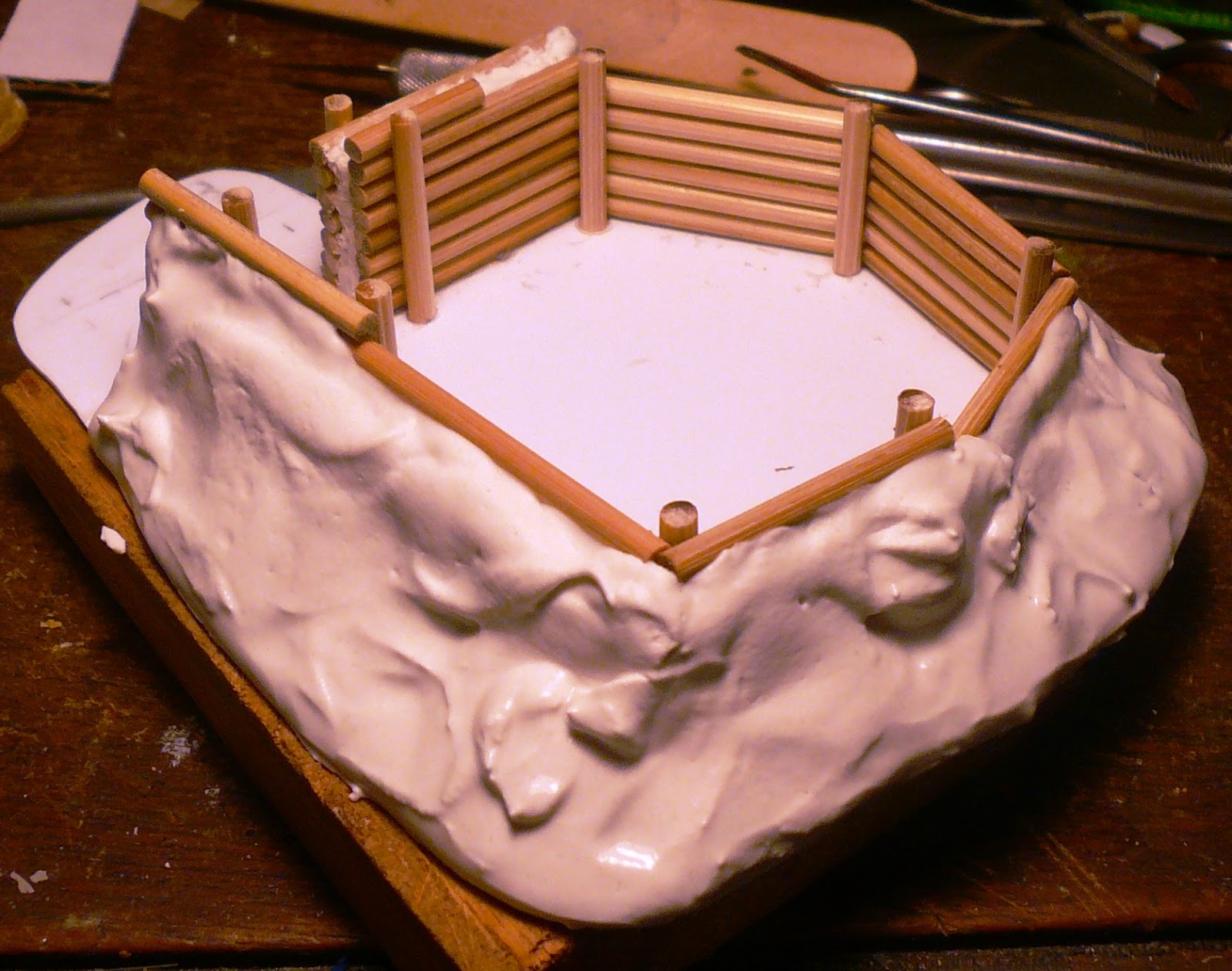 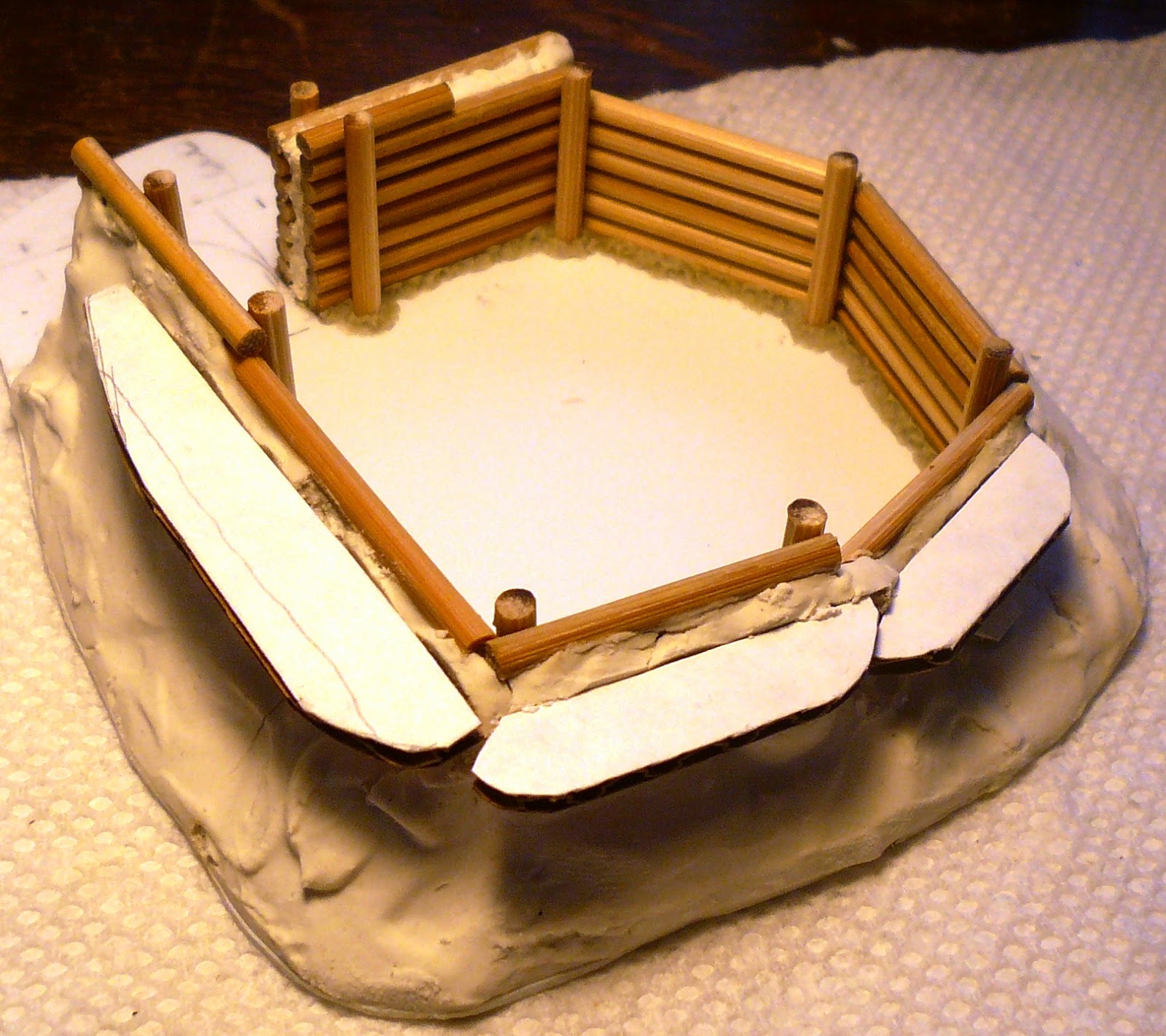 Once dry, I applied standard spackle to the outside of the emplacement, altering the level around parts where I wanted the bamboo logs to show. It is a messy process and care needs to be taken to ensure the log details are not obscured. One problem I noted early on – the height of “dirt” at the back and side of the gun pit would not keep shape. Too much spackle will not dry well and will slide off the base. After applying a lesser amount than I had intended, I cut the top of the spackle on the back and side edges of the gun pit to allow me to glue extra cardboard on top – this would allow me to build on top and flesh out the back by giving the spackle something to “hold on to” for support. The concept worked perfectly. 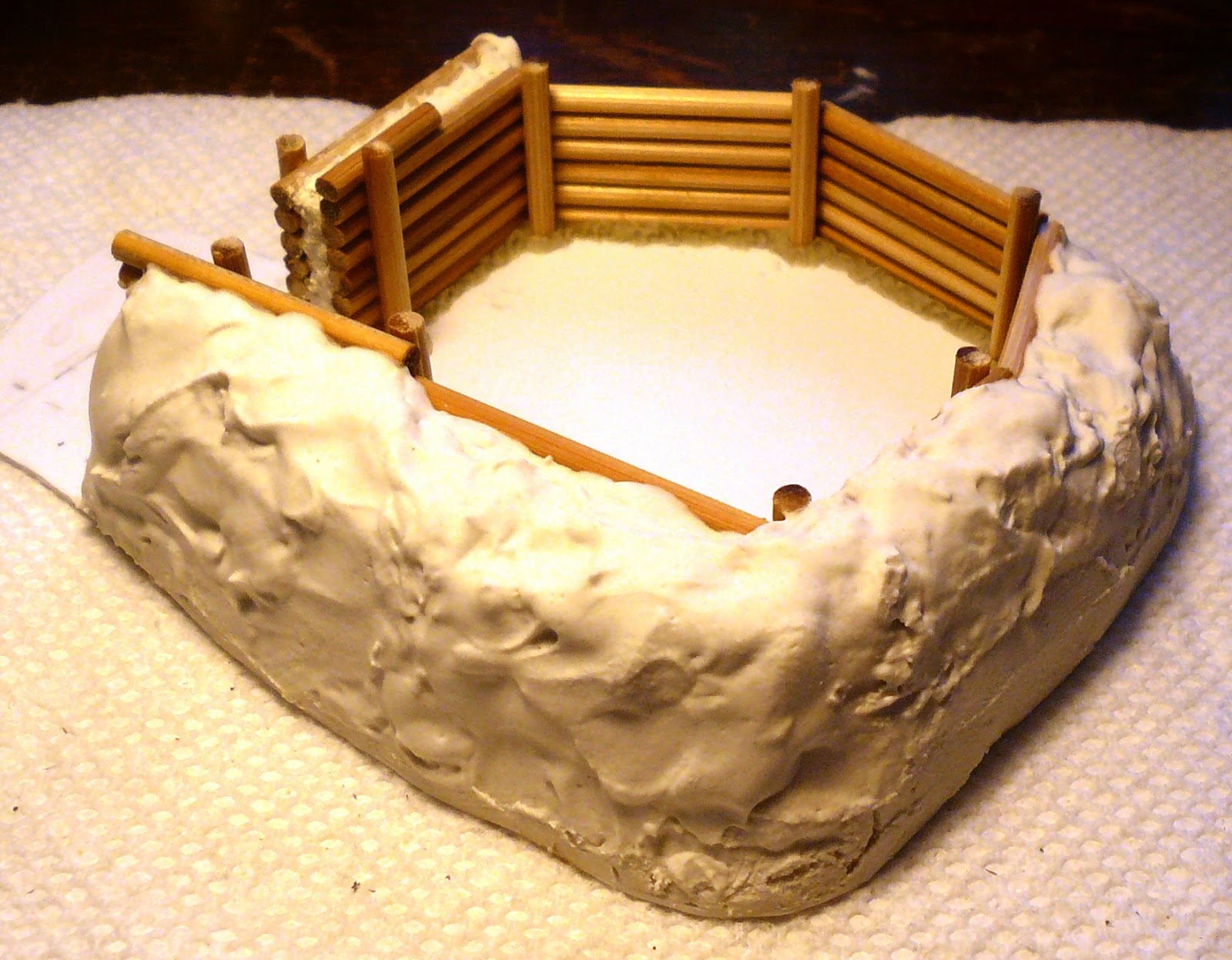 Ready for Ground Cover to be Added 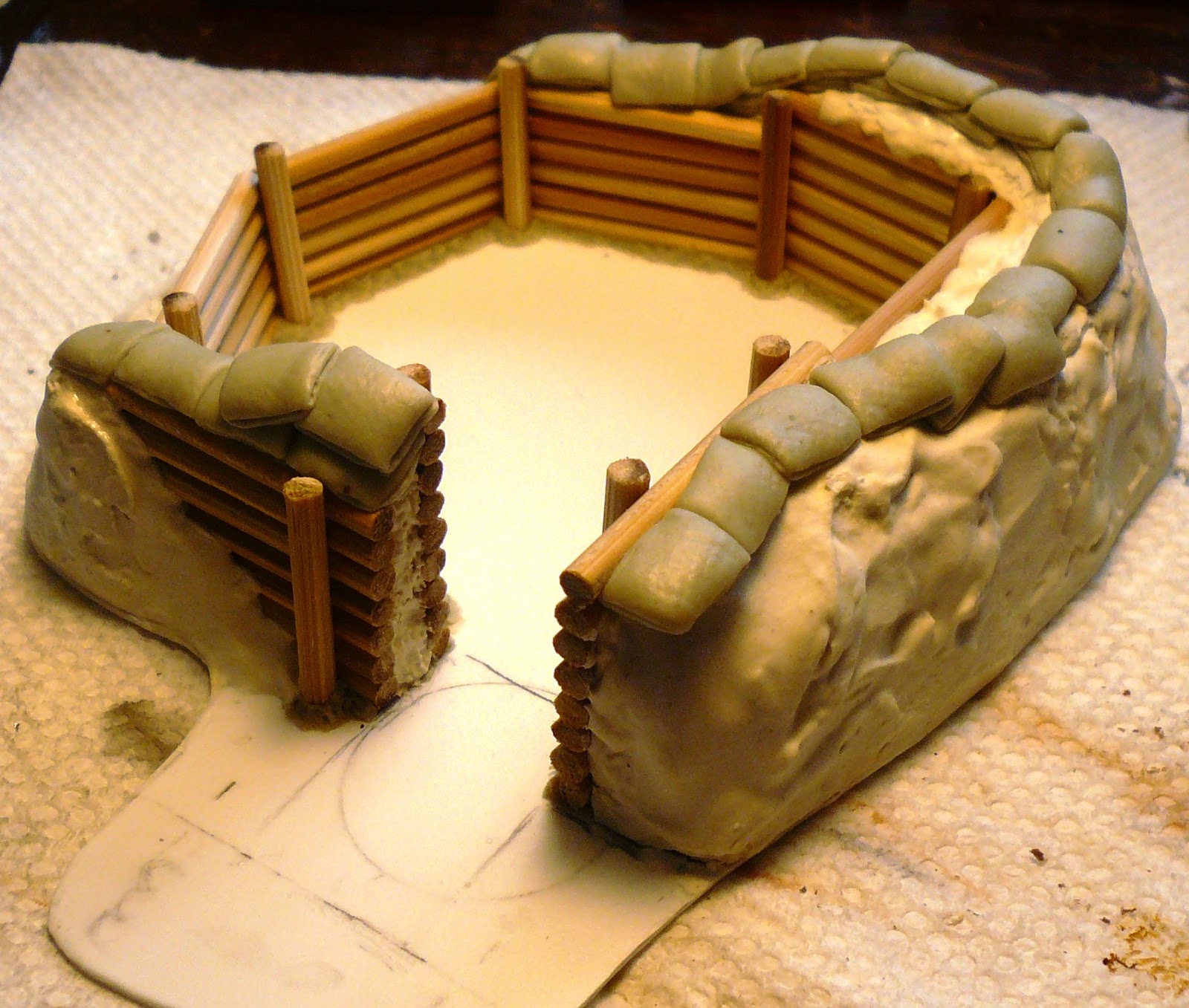 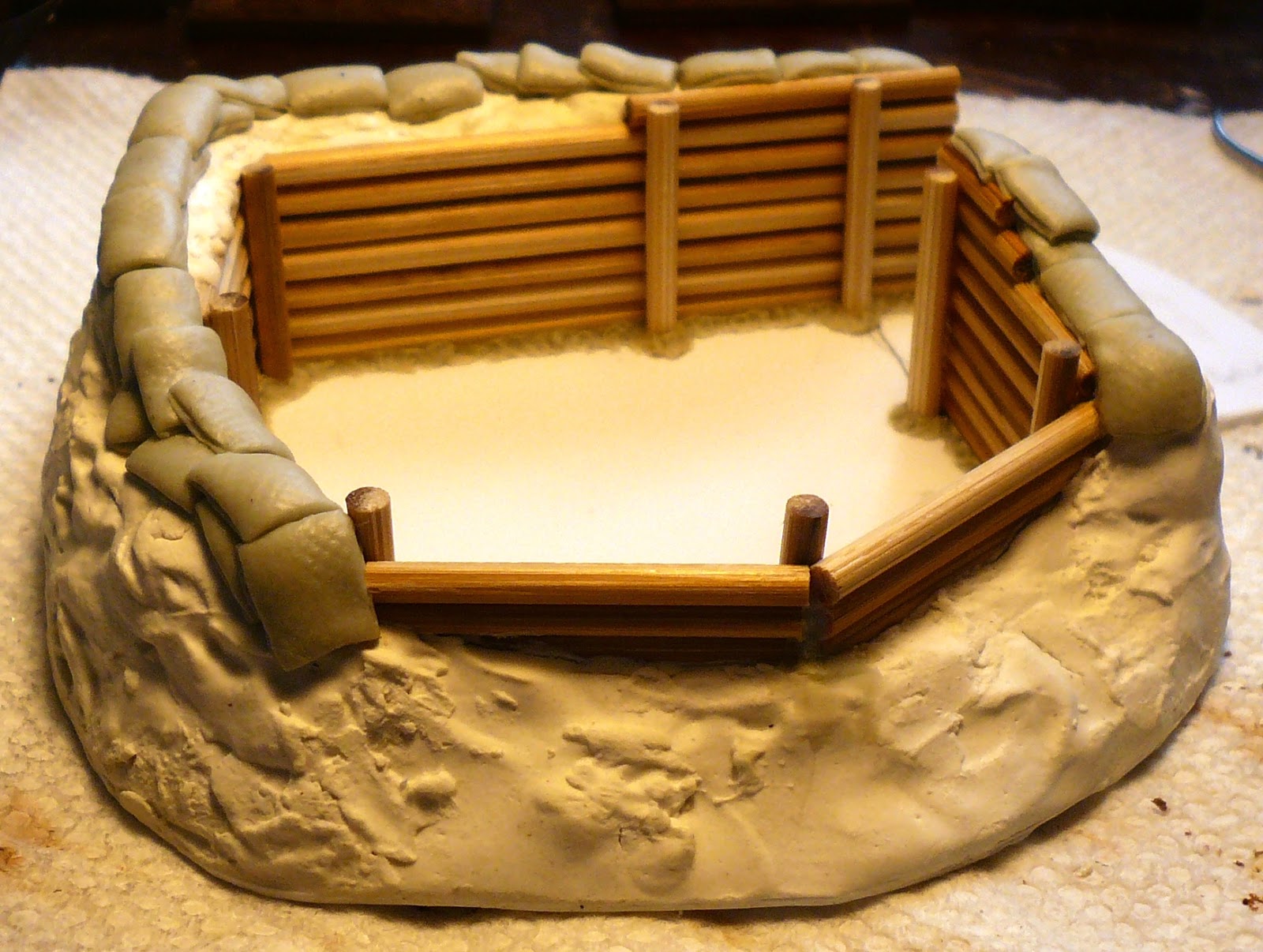 ProCreate was again used to make sandbags. The same napkin was used to press into the bags for texture and a sharp X-Acto made seams in the sides of the bags. I started from the entry way to the emplacement and worked my way out – any excess length will merely be an overhang to the edges of the gun pit. I purposely did parts in a haphazard manner for added effect. Each layer was left to dry overnight before applying the next on top of it. 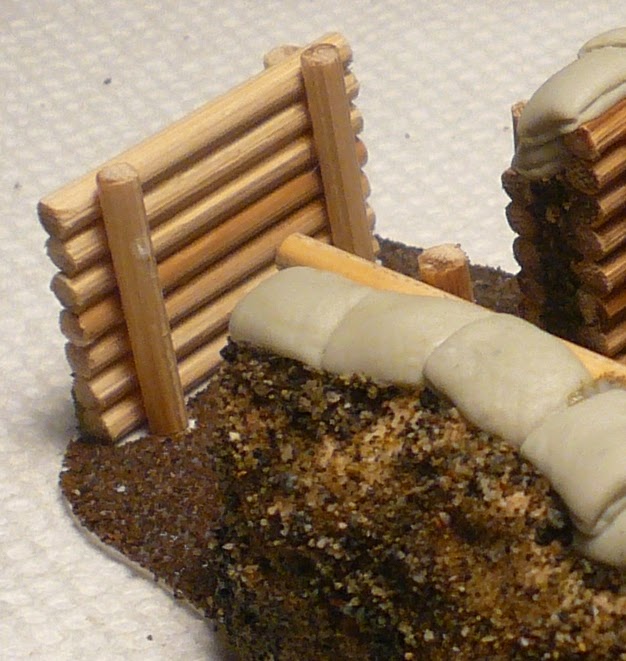 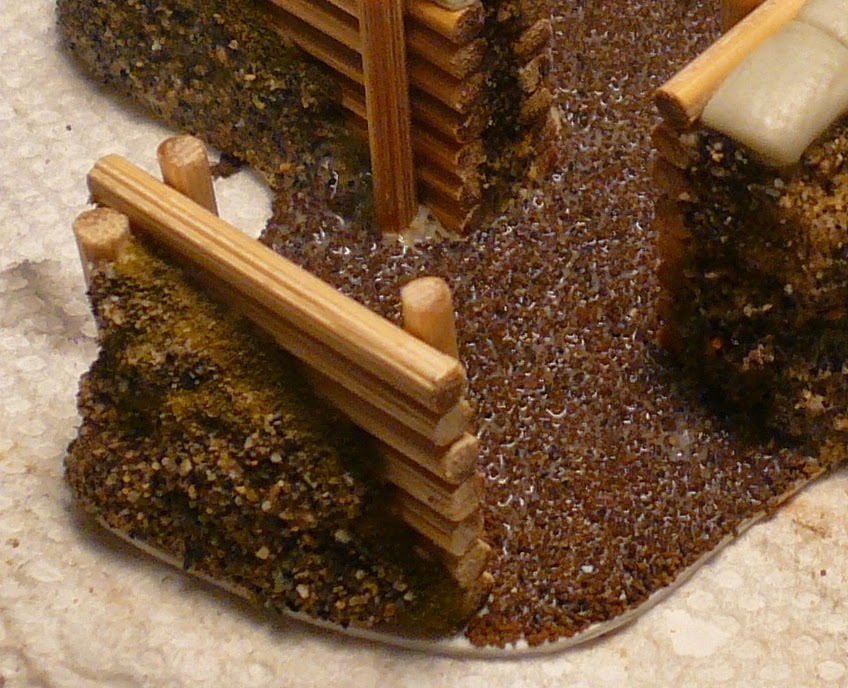 I was told that the blast wall would cast better if it was made separately. I guess I should have done the same with the ammunition area and blast wall on the first emplacement I built but, in all honesty, I had not considered they would be used for casting for others to enjoy. I measured the dimensions I wanted for the blast wall, cut the horizontal pieces and glued the vertical pieces on top. Using a 90 degree edge (a small box) to push on the bottom of the vertical pieces/bottom horizontal log helps make everything level. It was left to dry overnight and the following evening, I glued one vertical log to the outside and added some spackle to the outside wall all the while making sure it would fit along the edge of the base and allow a figure to occupy the entry way into the emplacement. 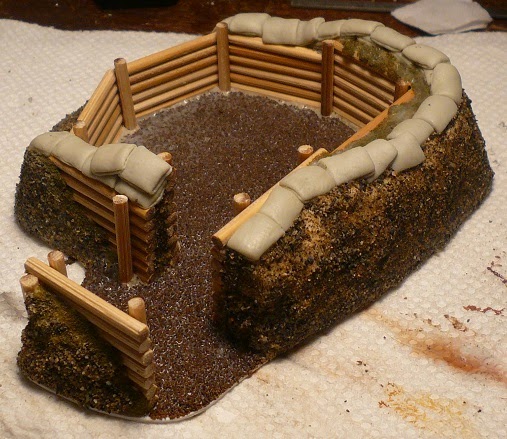 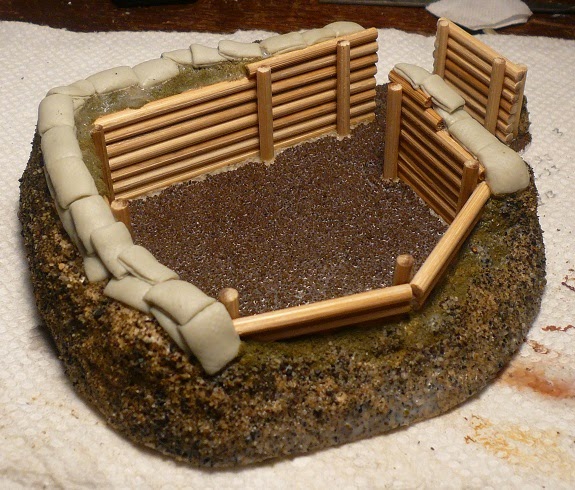 Finishing was exactly like the original gun emplacement:  I painted the inside of the emplacement with slightly watered down white glue and poured some fine sand/grit to line the inside, dirt floors. I chose to keep this generally flat – it might not be completely realistic but will allow figures to sit more evenly. Once dry, the outside walls were also painted with slightly watered down white glue and a heavier, less uniform ground/basing material poured onto it. The final, final stage, once everything was dried was painting the model several times with a 50/50 water/white glue mix, paying additional attention to the outside edges of the base. The extra gluing keeps the basing material in place. I would even recommend this to those not planning on casting these as these areas will also be where the model is grabbed, moved around and placed during game play. 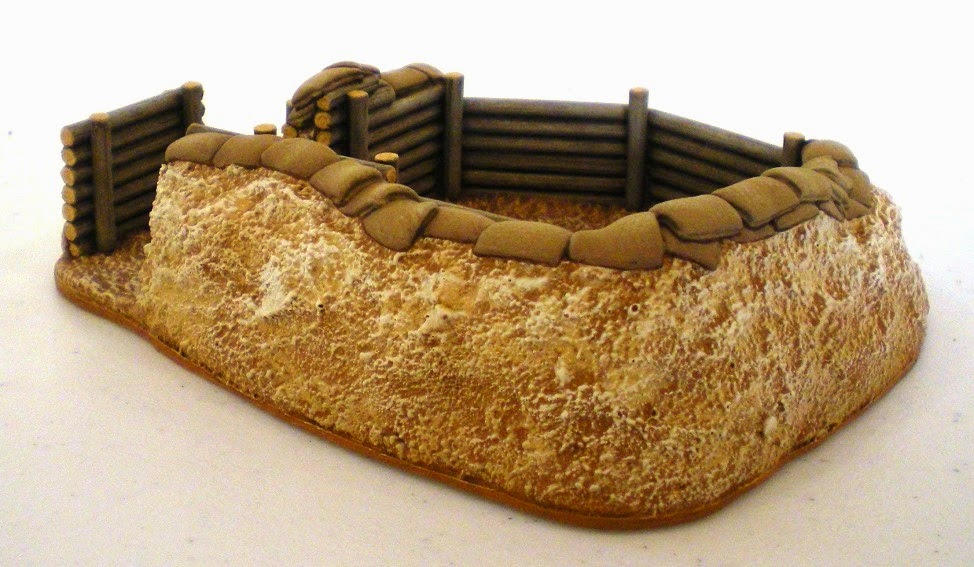 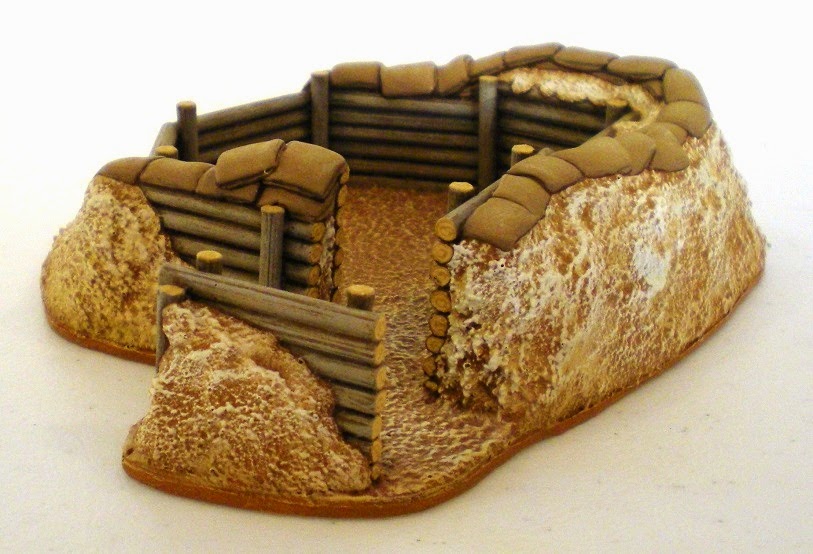 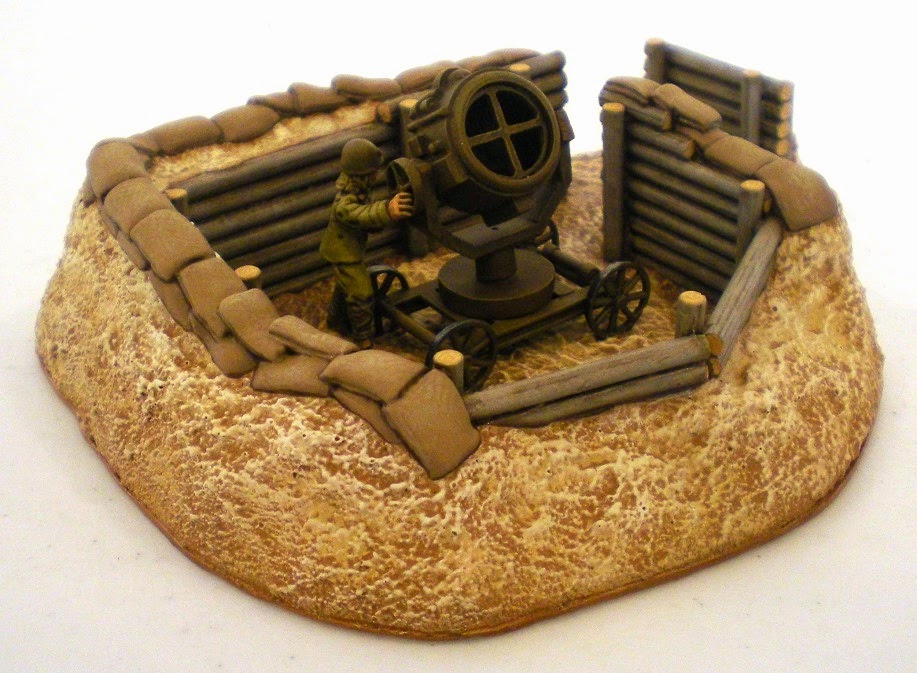 Painted Emplacement with Searchlight and Crew 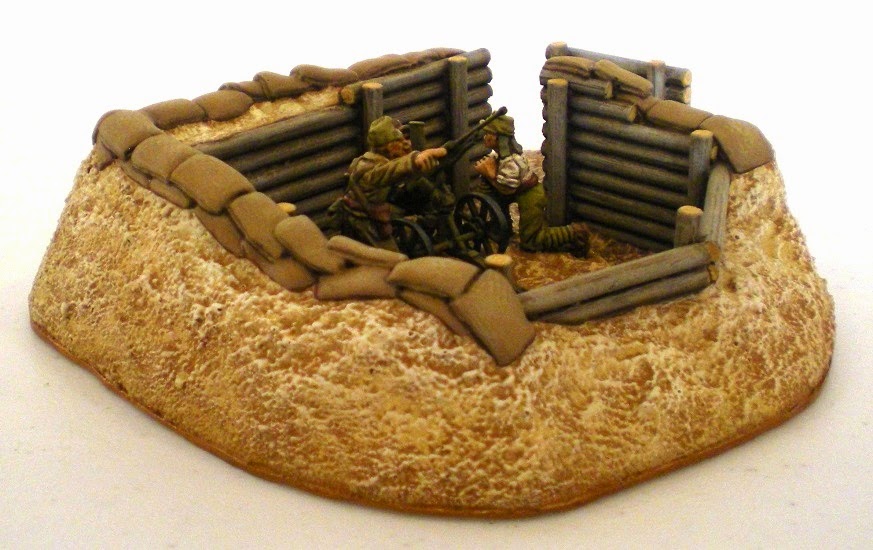 Now I have a pair of gun emplacements – while they can be used anywhere, I plan to use these in WWII Pacific Island scenarios. I have a small anti-aircraft gun, a searchlight crew and a larger gun. The searchlight crew will be yet another “How to” article. I am finishing up some converted figures to make Japanese gun crews – look for them shortly!