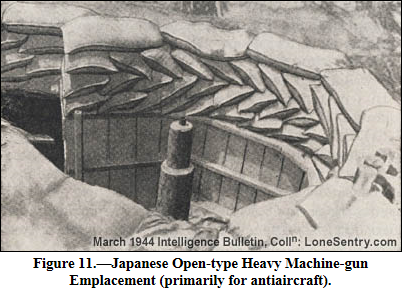 With my ongoing interest in the WWII Pacific theater, I decided to try my hand at something different. I already tried sculpting, building a couple of vehicles and a pillbox, so I thought some terrain would be interesting to attempt. I found out that, of all the building projects that I have done, this one was the most enjoyable and was not as difficult as I thought it might be.

As a model, I used photos that I found online from old U.S. Intelligence Bulletins (do a Google search for “Lone Sentry Betio Island”) and other image sites. I thought this emplacement would look good with an anti-aircraft stand I recently painted. To make sure the dugout would be big enough for the stand, I first placed the completed models on the stand and marked the circumference, adding about 5mm, all around. I did this to guarantee it would fit, and also to allow some variability for other gamers’ needs or for other types of guns. While the emplacements are based upon those seen on Tarawa and other Pacific islands, they can be used for other theaters as well.

After I got the dimensions I wanted, I calculated an additional distance to allow for the wooden wall, thickness of the sandbags, the surrounding piled up dirt and the entry way. This became the outline from which I cut the base out of 1mm-thick plastic. My wife orders a lot of stuff on line so we always have an ample supply of extra packages and used boxes. Using the metal 90-degree measuring device from Micro Mark, I cut out scraps of cardboard (remember to cut against the grain) to the appropriate lengths to make the dugout shell. When doing this, I knew this would take up space so I set this up outside the measured lines to leave additional thickness for the “palm logs” and flat wooden boards that would be inside of this shell. These were measured individually to allow for minor adjustments. I used Gorilla Glue to hold it in place. The extra braces on the outside of the wall were actually not entirely needed because the glue held so well and the flat edge of the cut kept the walls straight enough. I let the glue set overnight before working on the next stage. I have found that it is often good to do two of these at one time to permit working on one while the other is drying.

After the walls dried, I secured the outsides with blobs of two-part putty. I then used scissors to cut spare popsicle sticks or Starbucks stirrers to cut the inner walls of the emplacement, making sure the top edge was uniform. Errors in length would be covered with a little bit of two-part putty. Like the outer walls, the horizontal planks on top of the inner wall were measured and cut one at a time to ensure a good fit.

One of the walls of the entry/exit was for ammunition and spare parts storage. More popsicle sticks were used to make the shelves. The extra bits on the shelves were spare boxes, tarps and ammo containers; these were cut in half to keep from making the shelf too deep and, as the back half would not be seen, I got two boxes out of each original. More two-part putty was placed in between gaps in the boxes to prevent a lot of depth that would result in ‘undercuts’ where the mold would be easily damaged.

The palm logs were made from 12inch Bamboo Skewers available from the local Dollar Tree. A razor saw was used to cut these to the appropriate lengths before being glued into place. This was extremely simple and the results gave me the result I wanted. 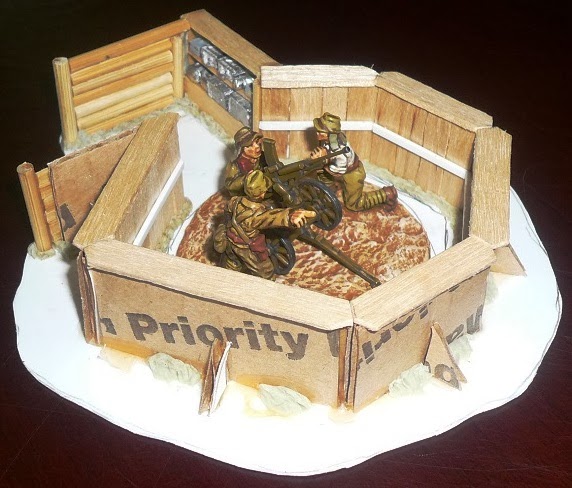 The “skeleton” – note the recycled cardboard, outer wall supports, “wooden” walls and top supports (on which the sandbags will go). 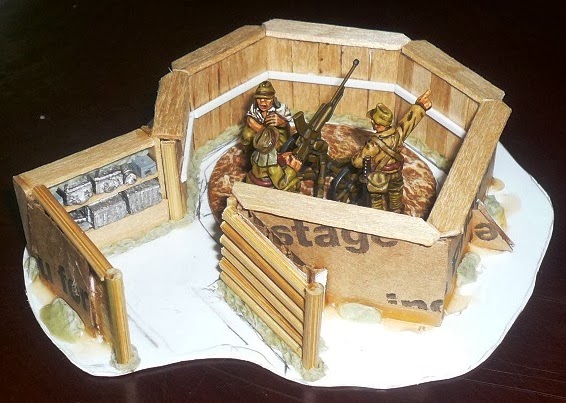 A better view of the ammo storage (needing filling to prevent “undercuts”), the bamboo walls and pencil outlines. The model fits nicely but not snugly.

The sandbag layers were the most time consuming part of this project. Fortunately, taking my kids to the local outdoor pool provided the free time I needed to get this done. I am far too old to find swimming in 60-degree water enjoyable. Before I mixed an appropriate amount of two-part putty (too little and you have to do this many times, too much at it gets tough to mold as it is curing) I drew the appropriate dimension of the sandbags I wanted on a 3×5-inch card (I think it was about 10mm by 8mm) so I had a template to allow each bag to be the same size. Once made, each sandbag was pressed into place by hand; I used an X-Acto blade to make a seam on each side/end of the bag with texture provided by pressing a napkin onto the still-pliable putty (the crisscross design on the napkin was impressed onto the sandbag). I had to let each row dry before working on the next. Nearing the end of the top layer, I had to measure and plan how to finish it off without having a sandbag 20cm long! 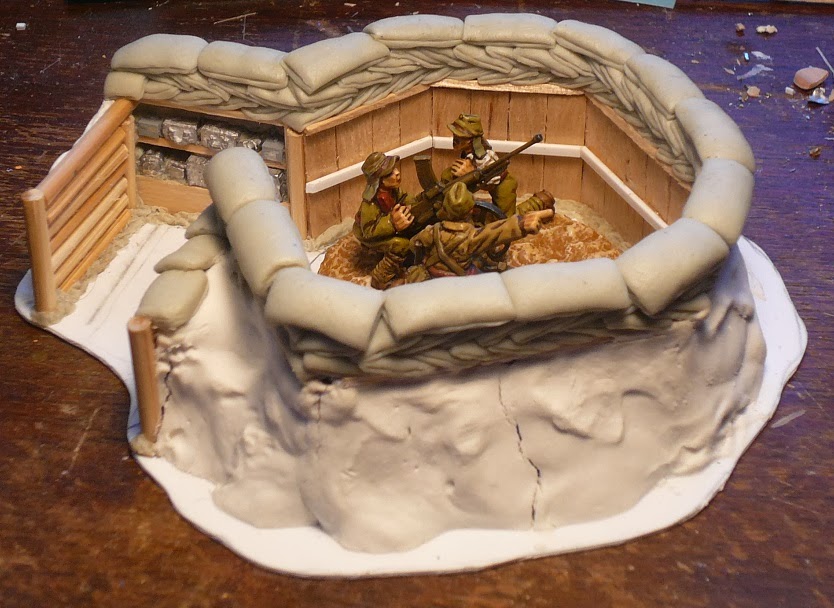 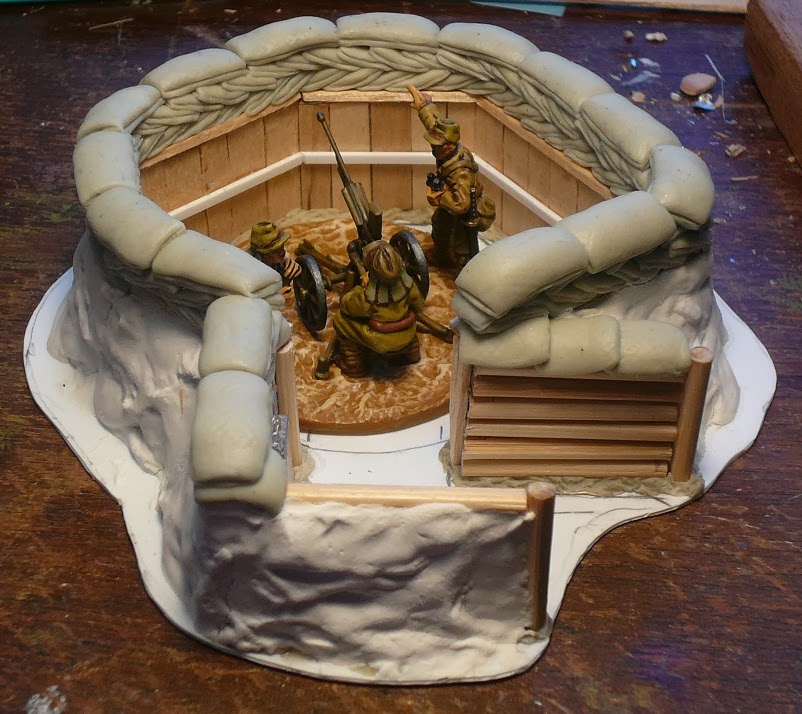 Another angle with a better view of the entry detail.

Once dry, I covered the outside wall with spackle. I have had a lot of success with this as a filler in figure conversion projects (it is very easy to use and the brittleness is fixed with a drop of crazy glue); I cannot recall when I purchased the tub I use. Sometimes multiple layers are used to put this on, sometimes one big application with a tongue depressor works just as well. This was put aside to dry overnight. 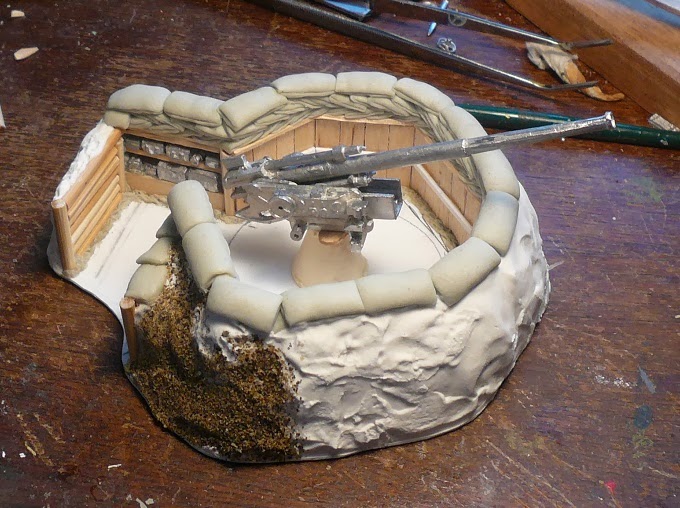 Final layer of spackle, beginning to add basing material, showing off a larger field gun that also fits nicely in the emplacement. 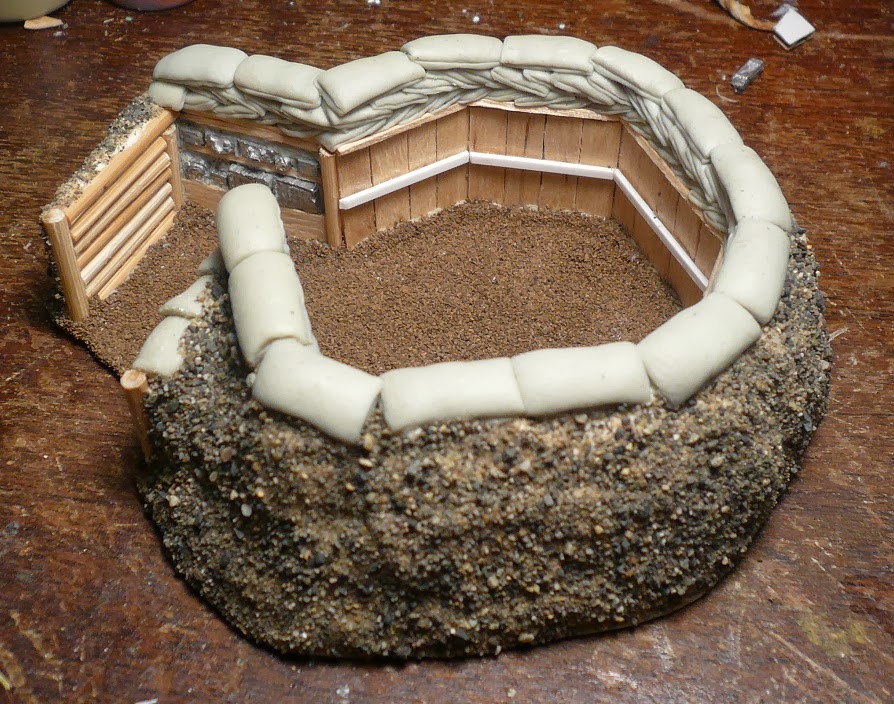 Finished emplacement with different basing material inside and out. A good view of the “filled in” ammo storage area.

Finally, I painted the inside of the emplacement with slightly watered-down white glue and poured some fine sand/grit to line the inside dirt floors. I chose to keep this generally flat; it might not be completely realistic, but will allow figures to sit more evenly. Once dry, the outside walls were also painted with slightly watered-down white glue and a heavier, less uniform ground/basing material poured onto it. The final, final stage, once everything had dried, was painting the model several times with a 50/50 water/white glue mix, paying additional attention to the outside edges of the base. Advice given to me from someone with more experience was that this area bears a great deal of stress in the casting process. The extra gluing keeps the basing material in place. I would even recommend this to those not planning on casting these as these areas will also be where the model is grabbed, moved around and placed during game play.

This was the first of the two emplacements I made and, as I said previously, I was surprised to have a lot of fun doing this. These two emplacements were not daunting, like some projects where precise measurements are absolutely necessary. The ability to build fairly freely was really enjoyable and I was very pleased with the final product. 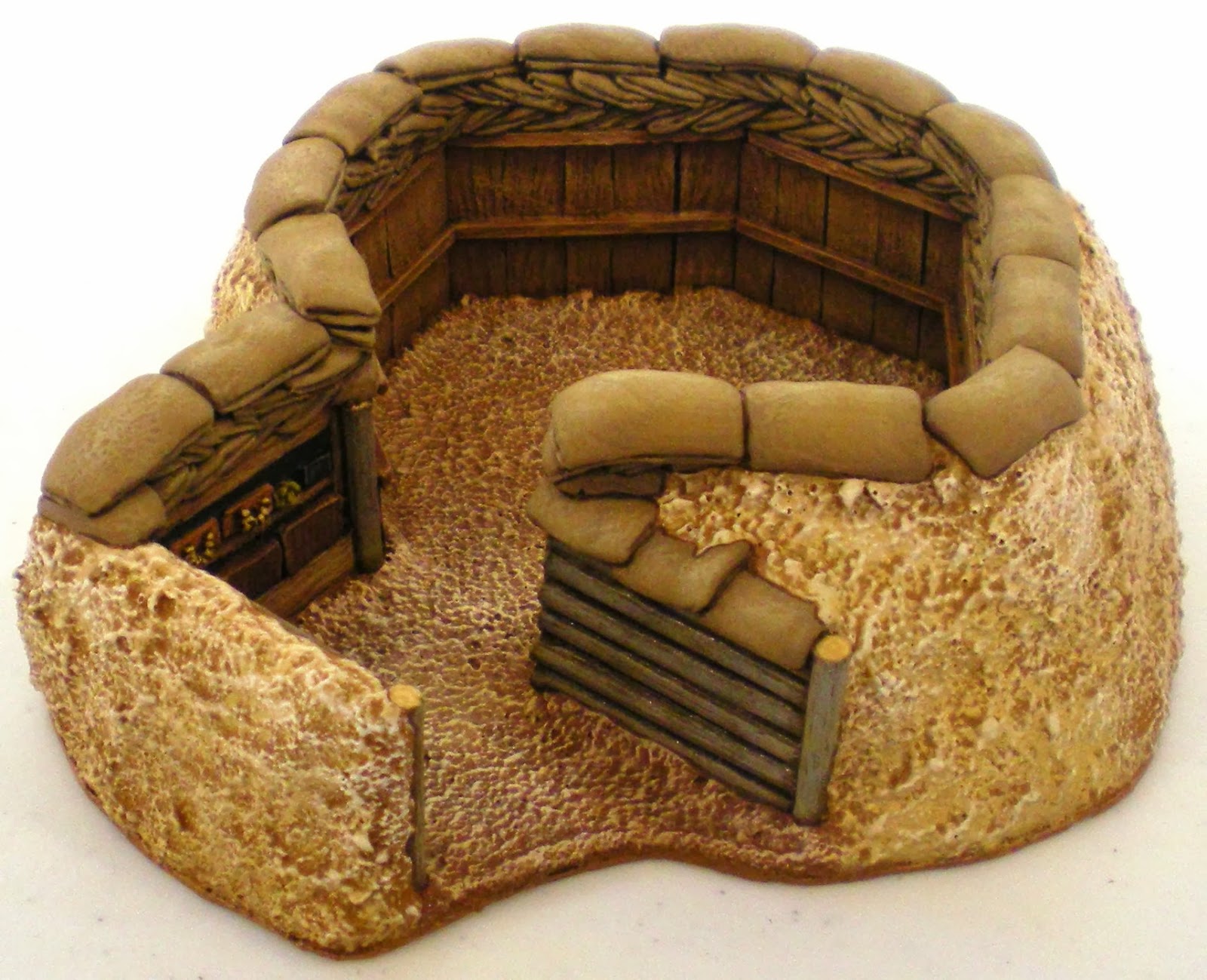 A view from the emplacement entry/exit. 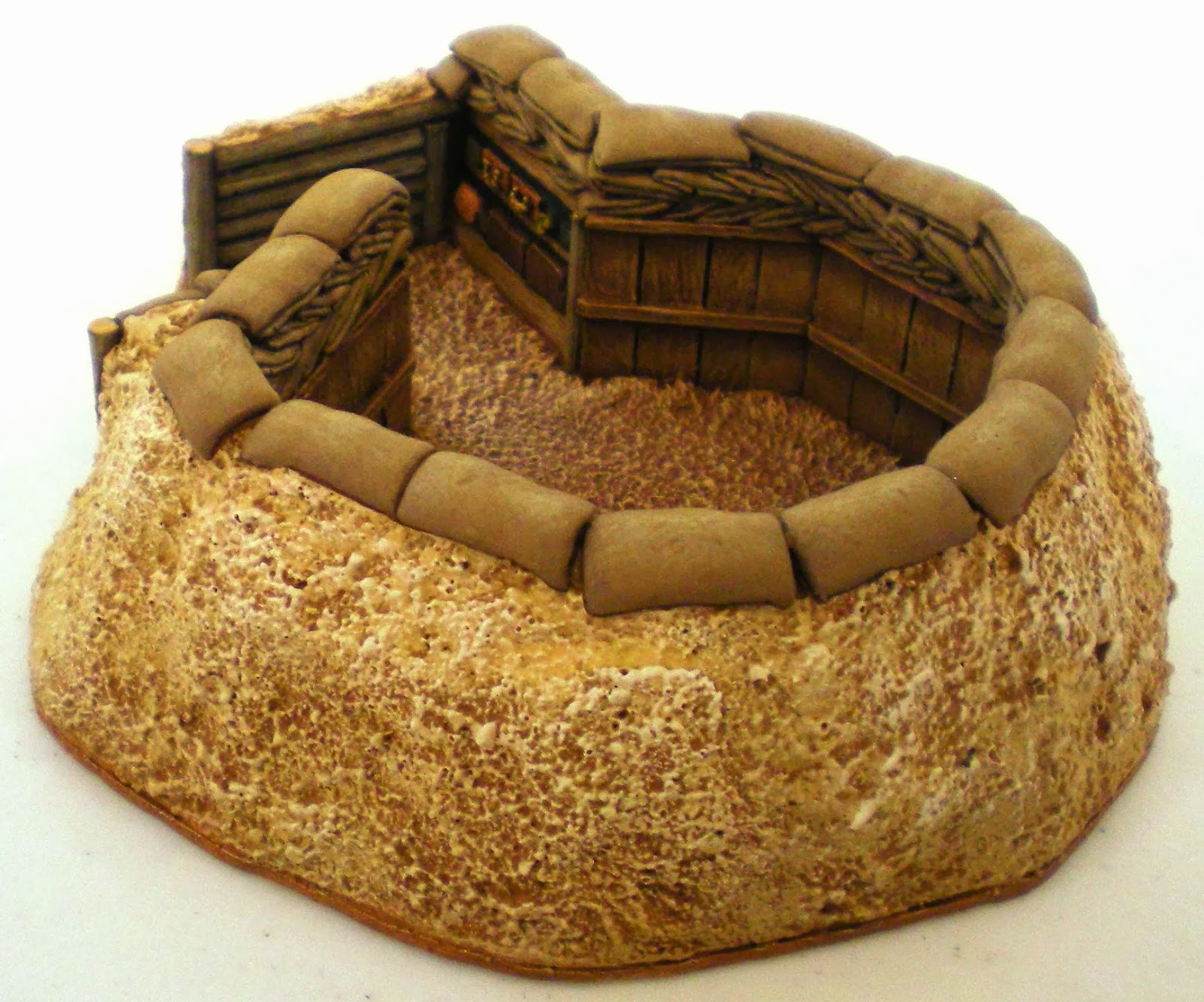 For the second article in the series, click here.